Menu
Home
>
Travel
>
10 Most Beautiful Medieval Castles in The World

It helped to inspire Sleeping Beauty Castle at Disneyland, Neuschwanstein was a refuge for Germany’s King Ludwig II of Bavaria who spent much of his kingdom’s fortune building castles.

The power of myth lives at this fog-cloaked castle erroneously believed to be the home in Bram Stoker’s Dracula.

The author never visited this fortress, commonly known as Dracula’s Castle and guarded by a ring of mountains in Transylvania, Romania.

A stunning example of French Renaissance grandeur, Chambord Castle is the largest in the château-speckled Loire Valley of France.

Built by Francis I in 1519 as a hunting lodge for the royal court, the symmetrical stronghold was rarely lived-in.

The former residence of the Tiele-Winckler family was originally designed in Baroque style in the 17th century, …but the later addition of a neo-Gothic and neo-Renaissance wing brought Hogwarts appeal to the castle, especially at night when its 99 Rapunzel-worthy towers and glowing windows shimmer in the outdoor reflecting pool. 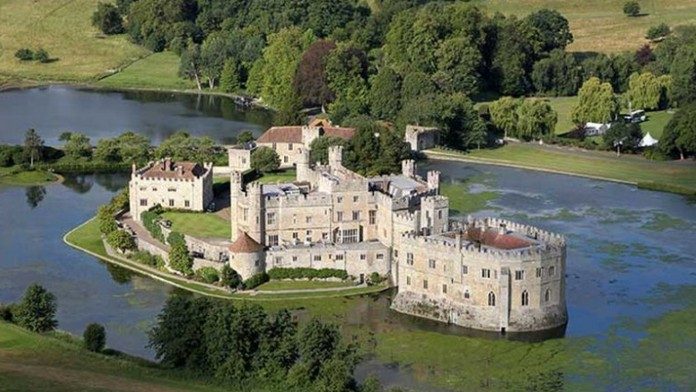 Situated on two islands in the middle of a lake, Leeds Castle is grand, romantic, and as close as you can get to a real “a once upon a time” experience.

Like a fairytale village plucked right out of central casting,

Prague Castle is actually a complex of courtyards and historic buildings, including the gothic St. Vitus Cathedral where Czech kings and queens were crowned.

Portugal’s fanciful Pena Palace glows red and yellow above the town of Sintra and can be seen from Lisbon on a clear day.

The UNESCO site dates to the Middle Ages when Lady of Pena chapel was built here.

The most visited castle in Slovakia is a setting perfect for daydreams.

Built as a wooden fort in the 12th century, the castle changed hands many times but attained its current good looks in the late 1800s from the last owner.

Like most Spanish castles, Segovia was built for defense,…but little of the original structure remains, and its soaring round towers above the confluence of two rivers now lean more fairytale than fortress.