Menu
Home
>
Other
>
30 “WTF” Moments Europeans Experienced In The USA

It’s no surprise that the American and European cultures are vastly different – and I’m not just talking about food and sports. Sometimes it can be difficult to grasp just how different the two cultures are – and believe me when I say that some of the differences are absolutely mind-boggling.

A little while ago, someone on Reddit asked European users to share some “WTF” moments that they experienced while visiting the USA, and their answers will surprise you. From sweet bread to restaurants promoting obesity, check out all of the weird American things that left Europeans baffled in the gallery below! 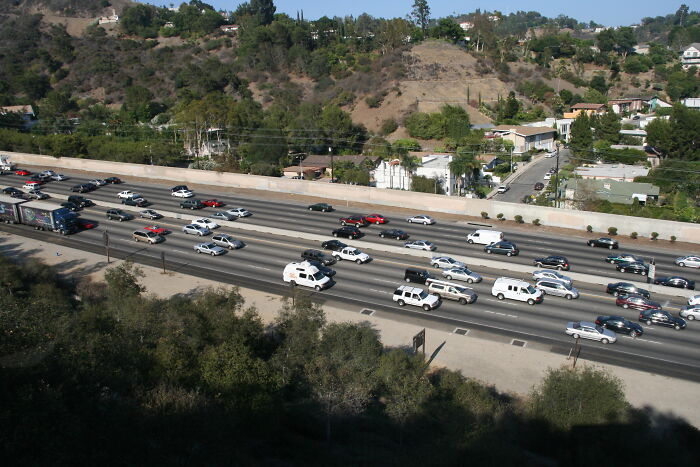 Was staying with the nicest family ever. They worked extremely long hours and lived in the suburbs. I wanted to cook for them as a surprise and set out to the store on foot, with an empty backpack for the groceries. Had to walk along the curb of, and then cross, an 8 lane highway to get to the store. Had to stop a really really old man from bagging the groceries. Then was stopped by police on the way back. They were very friendly, just wanted to know where my car had broken down. Ended up explaining to me that there was basically zero infrastructure for walking out in the burbs. They took me home. On the way, I saw a sign “gas 99 cents a gallon, Bud’s Xmas Gift to the Community”, blew my dad’s mind when I told him later. Got home, thanked the nice officers, made a vegetable casserole. When my wonderful host family came home, they were blown away but also extremely worried. All in all, I would say that no matter how crazy America may be or seem, Americans make up for all of it. They are some of the friendliest, most welcoming people I have ever met. 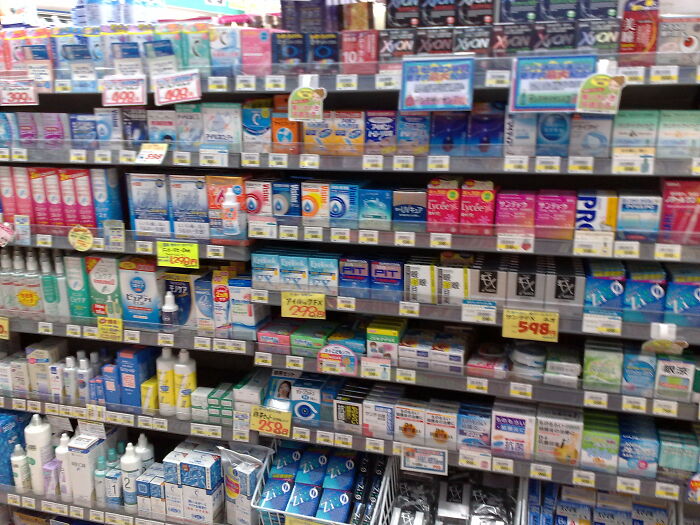 The cheerful, smiling faces on a medication TV add while the voice over mentioned that death is a possible side effect. 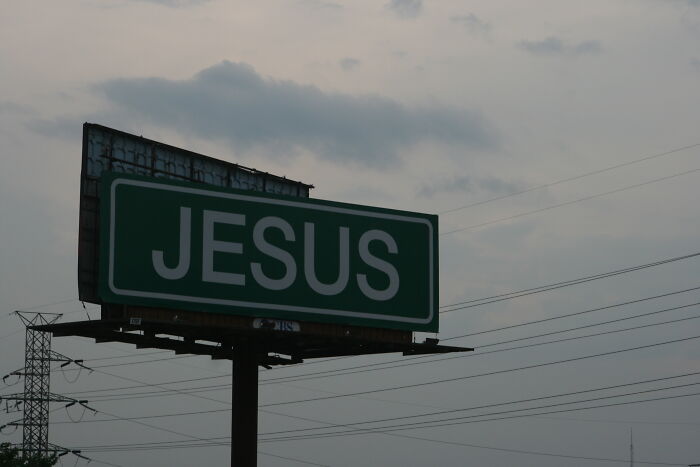 Roadside billboards scattered along the interstates in the South. 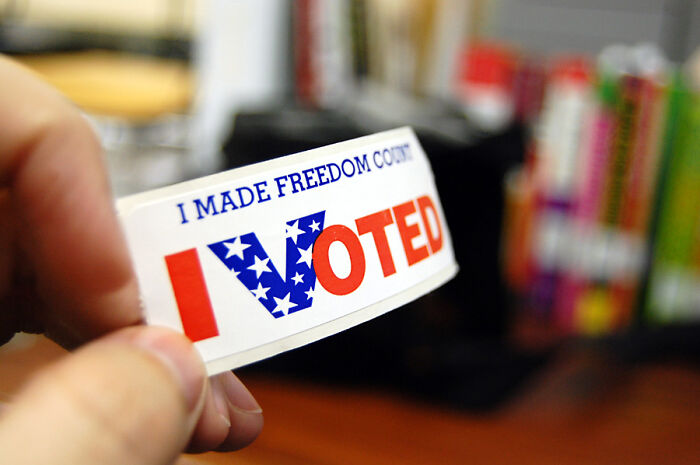 The political ads on TV that do not promote but instead demonize candidates!

“So and so is a devil from hell that will eat your newborn for breakfast if you vote for them! Don’t do it if you love America!” Scary music and black and white footage included. Weird, very weird. 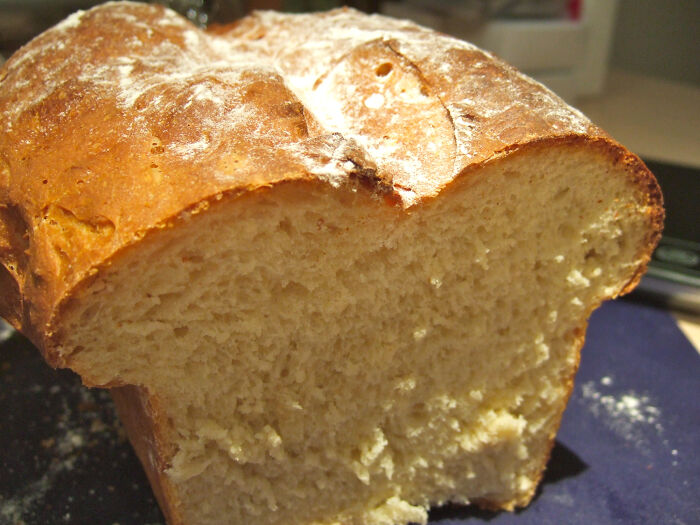 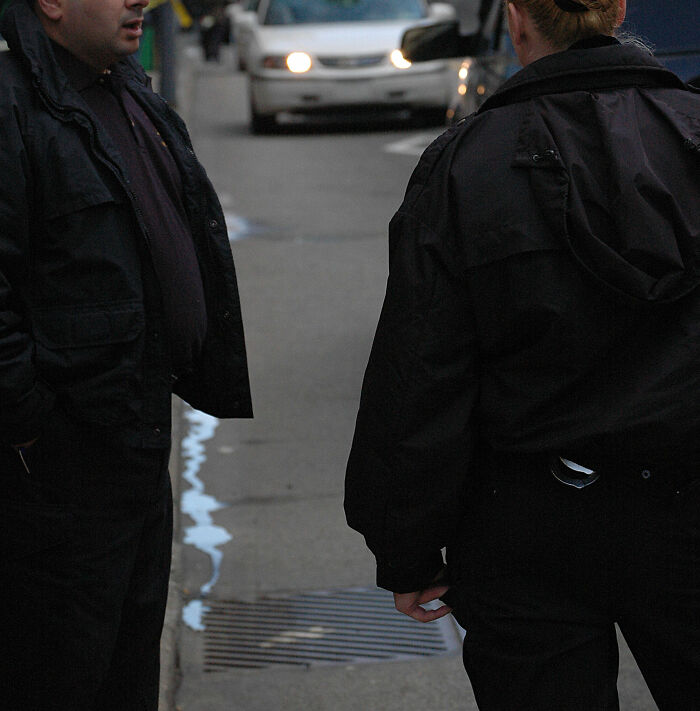 Especially as a bloody introverted Finnish person (stereotypes kicking in) it was terrifying how people had a ton of chitchat and were really talkative. Wished me a good day and asked about useless stuff 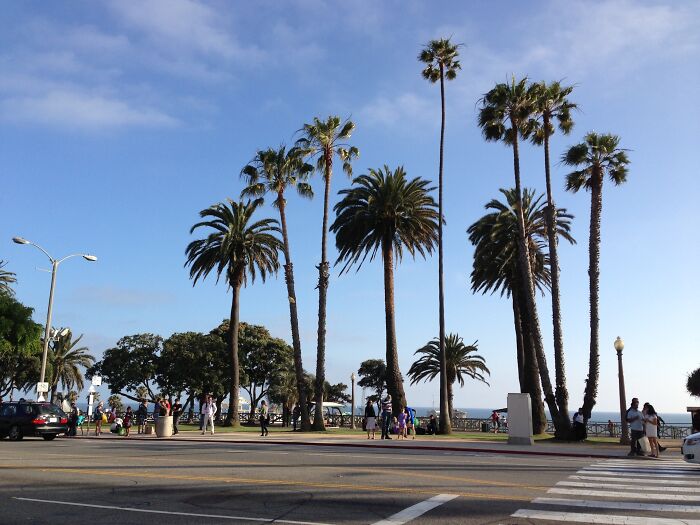 Went to L.A. a week last year for work.

Things like portion sizes, the average weight of people, quality of food and commercials etc. are just what I thought they would be. But the surprises for me:

1. I do know the modeled Los Santos in GTA from L.A. but I didn’t realise how well they did it. People talk and behave basically the same way. The sound, the light, the landscape, the frickin RADIO! I thought a big part of it was just exaggeration. Nope! This was actually kind of fun, driving around looking at things going “oh wow this is where that thing happened in the game”. Awesome!

2. There are a lot of homeless people and you can tell a lot of them are sick and/or have psychological problems. This sure doesn’t remove any of my prejudice about american healthcare and social security…

3. The extreme differences between neighbourhoods that are right next to each other. Sure, I understand why one street might have houses that look nice and are well taken care of and another not so much. But why is there a difference in how well paved the road is? Why is the “poor” street in such decay with lots of potholes and the “rich” street so clean and free from pot holes? Aren’t things like fixing the roads the responsibility of the city? Mind boggling that they care more about rich neighbourhoods and the poor ones. If they did that so blatantly back here there’d be some things and a big fan involved.

Generally the social class differences are of a magnitude I’ve never seen before. Honestly I thought the things I heard before where somewhat exaggerated. I was wrong. And it is right in front of you basically all of the time! Really really sad to see. 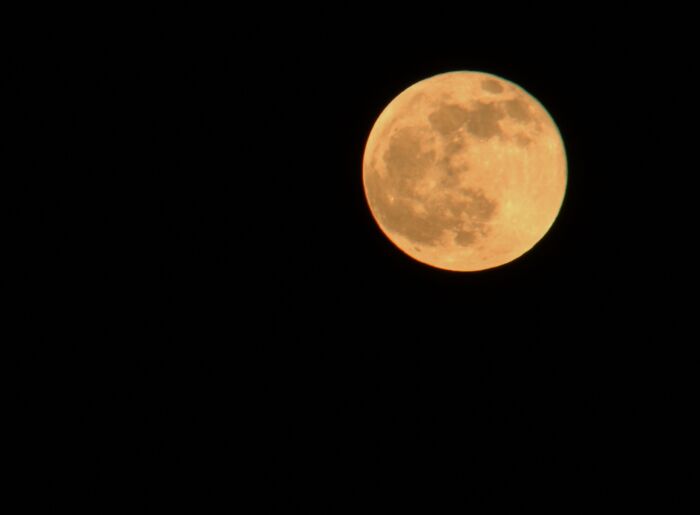 Was on an exchange. 2 most memorable questions were “Can you see the moon in Europe” and “Do you have Pizza in Europe”. Something else I’ll never forget was the map of Europe in the school I went to which still showed the country of Yugoslavia (which doesnt exist anymore) and all the borders were messed up. A map IN THE SCHOOL. 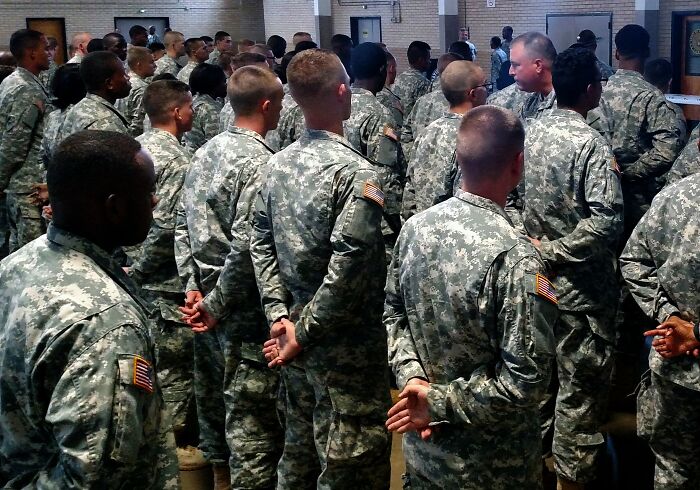 Went there as a german soldier on a semi work related trip, wearing uniform. The sheer number and the way people thanked me for my service (apparently as a german I qualify for this by extension), gave me discounts or even stuff for free (Starbucks) was astonishing. In germany, the public treats its servicemen with what one federal president called “a friendly non-interest”. The US showed me a different world… But I also gotta admit that it was frightening to a certain degree. It feels like… a bit too much of everything. Too much admiration, too much trust in what the uniform stands for, too much “automatic repetition” of the phrases and as a result too little normality. Still a memorable and enjoyable one-time experience 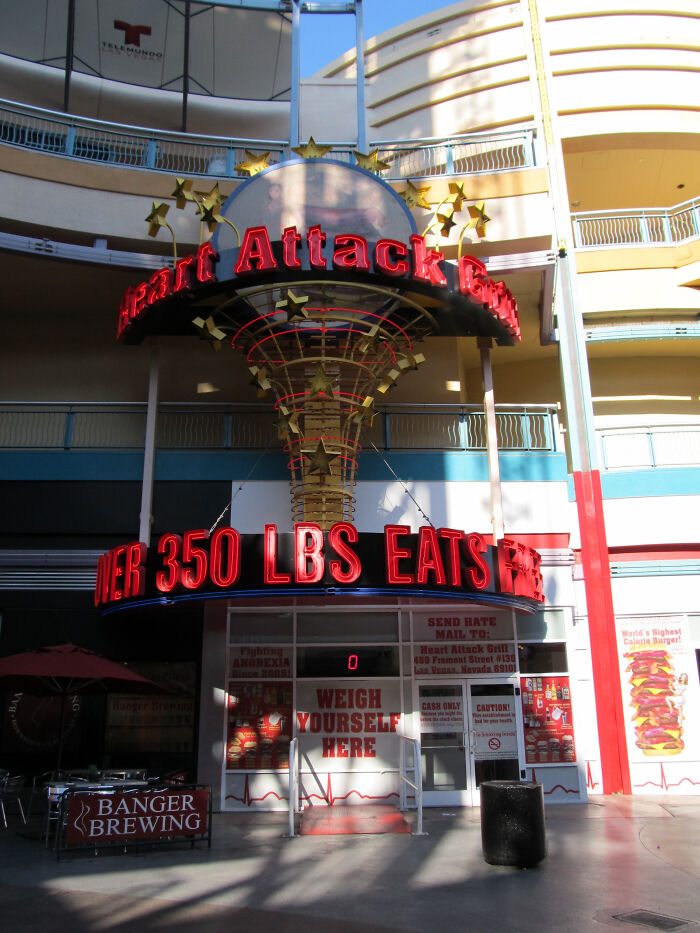 The Heart Attack Grill in Las Vegas absolutely blew my mind. The fact that outside it they have what looks like a scale for use on a farm, but for weighing people, and if they weigh over 350lbs they eat for free, was horrendous and it took me ages to get my English mind around it. 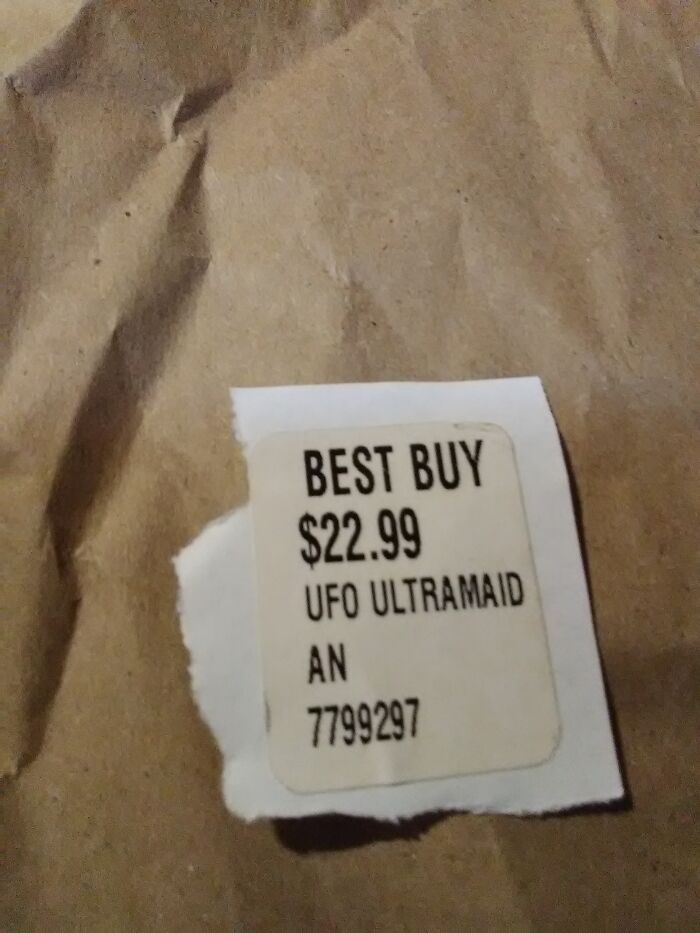 Tax not included in the price tag. It’s…weird! 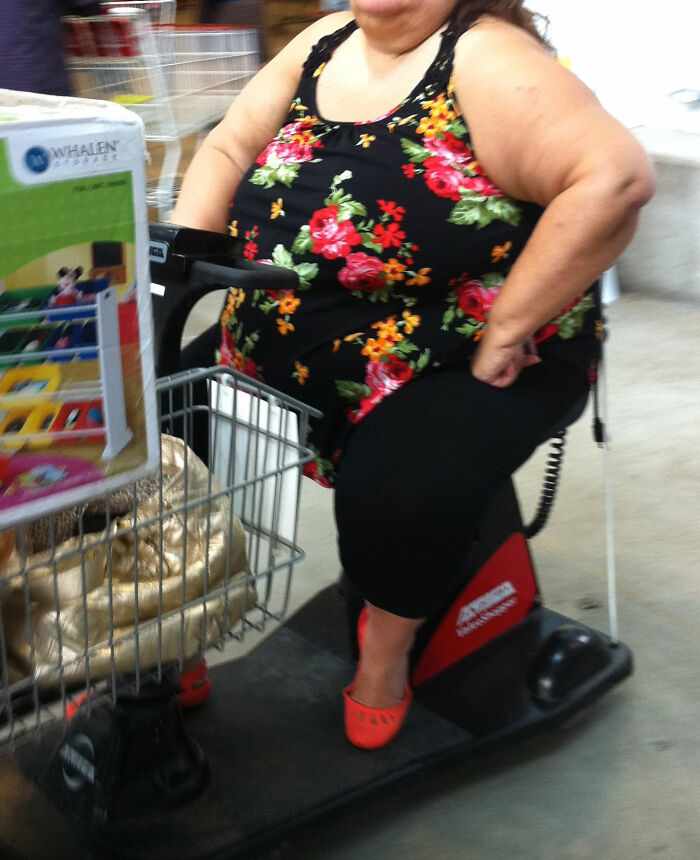 The amount of obese people. Obese people riding electric scooters at shopping places. Being handicapped because you are obese.

French married to a US citizen here. The one thing that surprised me most, apart from the portion sizes and the overload of sugar eveywhere that everyone mentions, is the convenience culture.
As long as you have a car, you can go buy anything and everything at virtually any time of day or night. And, oh, the amount of stuff you can have delivered at your place in less than an hour ! The workers do not seem to enjoy such a huge quality of life. Who would, if they had to work the 2am-12pm shift in a fast food place for minimum wage ?

On top of that, one other thing is how people are proud of working themselves to death, picking up all the overtime they can and not sleeping. Some of them have to to make ends meet, but most I know do not need the overtime and could use it to catch up on sleep, but don’t. Instead, they drink coffee… It seems like companies managed to make the people link personal worth and pride to how much one works. Not the quality of it or the enjoyment of the job, but simply the amount of hours. 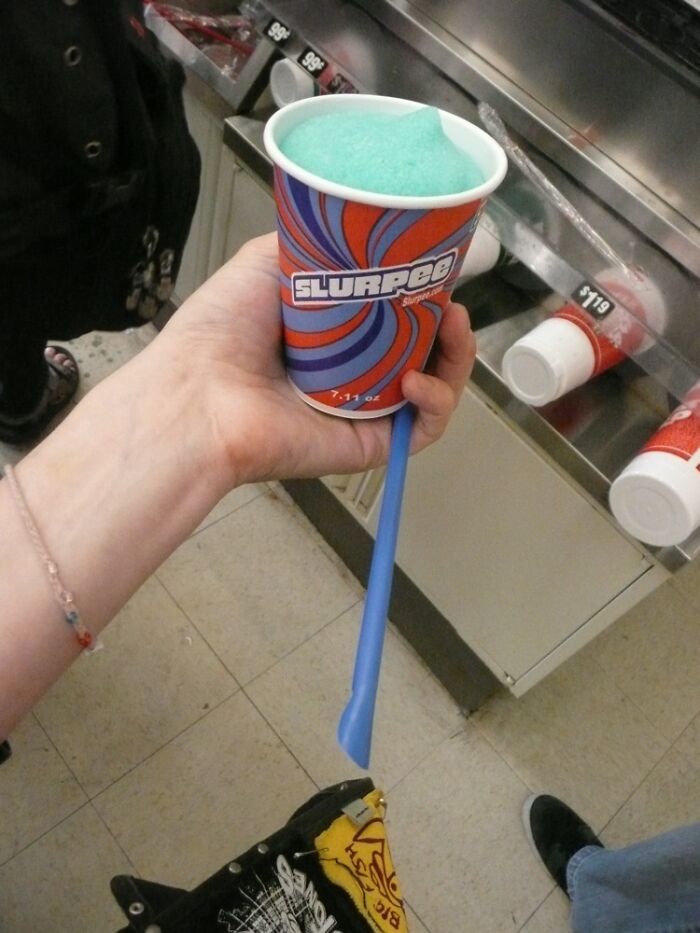 I ate a blue slurpee ice-drink thing in a theme park and three hours later, I kid you not, I did a VIBRANTLY BLUE [POOP].

No food in Europe has ever contained an ingredient that made my [poop] come out blue.

That made me go go “WTF” – I was WTFing so hard that eleven years later I still remember that blue [poop]. 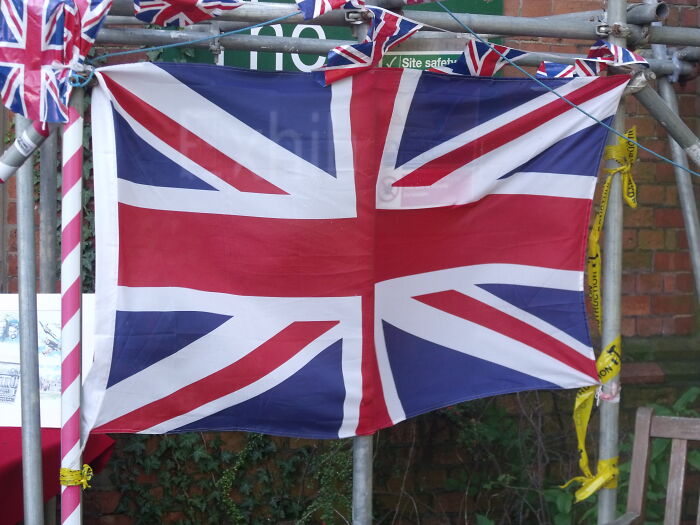 When in Boston someone realised we were British and came over to have a conversation:

“Oh my god, I have a friend in England. She lives in London. Do you know her?”

Hmm, there are 9 million people who live in London, and 65 million in the UK. The chance of me knowing one individual is quite remote! 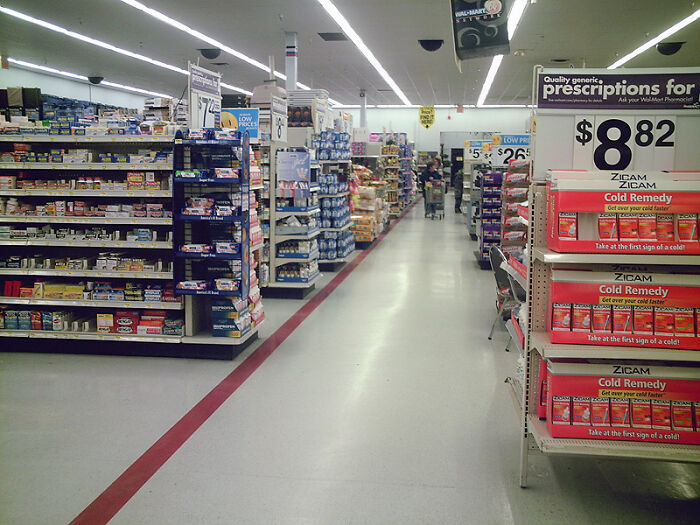 Ads for prescription medicines. Like what the actual hell. 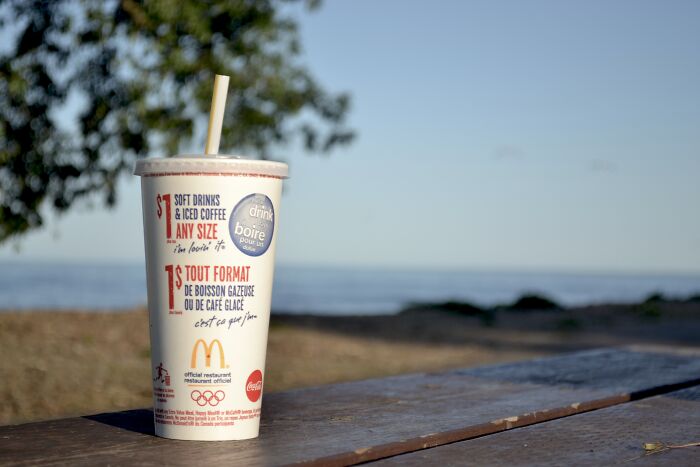 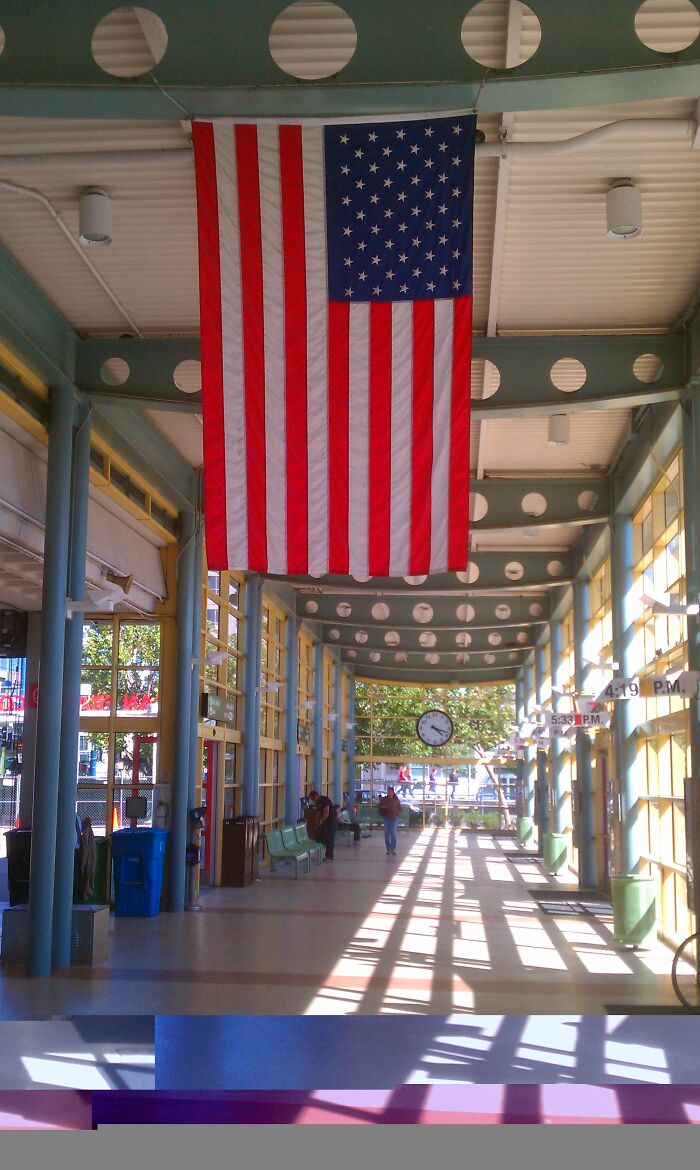 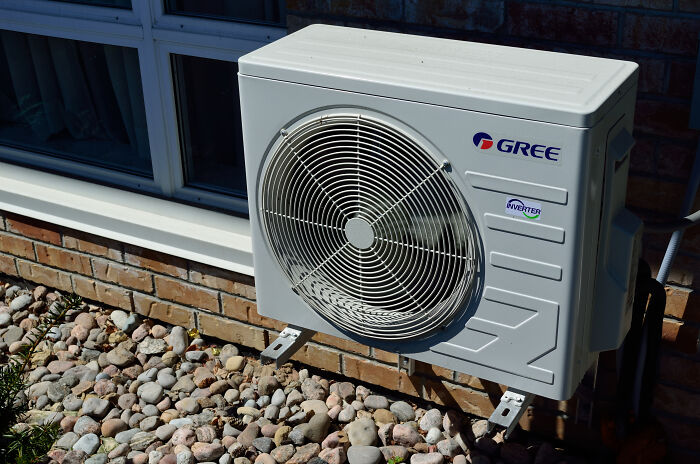 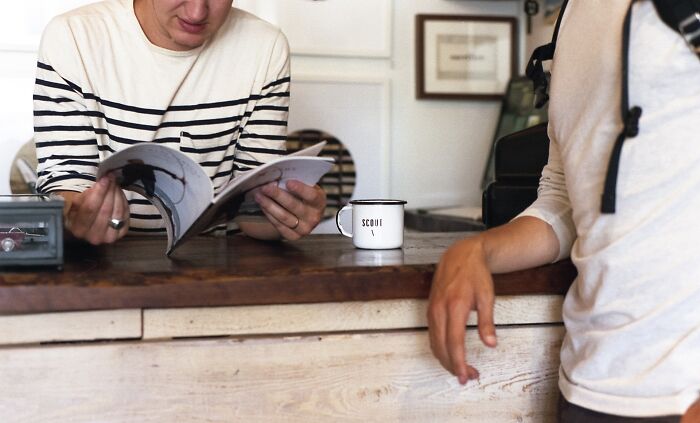 It’ a minor thing, but everyone asking “how are you” without wanting to know the answer.

On the first day of our US roadtrip we stopped for lunch at a roadside restaurant south of San Francisco. When we tried to pay the waiter told us that another customer that just had left paid for our meals and whished us a nice trip.

WTF, who does that. So nice! Totally made my day and honestly the whole vacation. 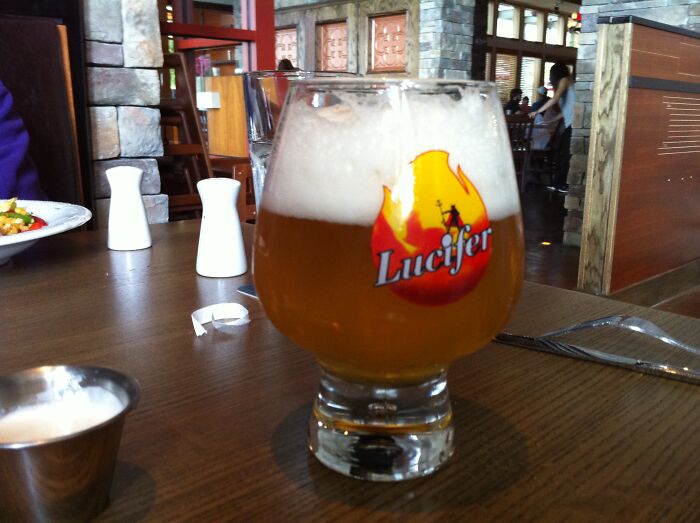 The general weirdness surrounding alcohol. Us Brits went for a drink at lunchtime once and our American friends were referring us to AA 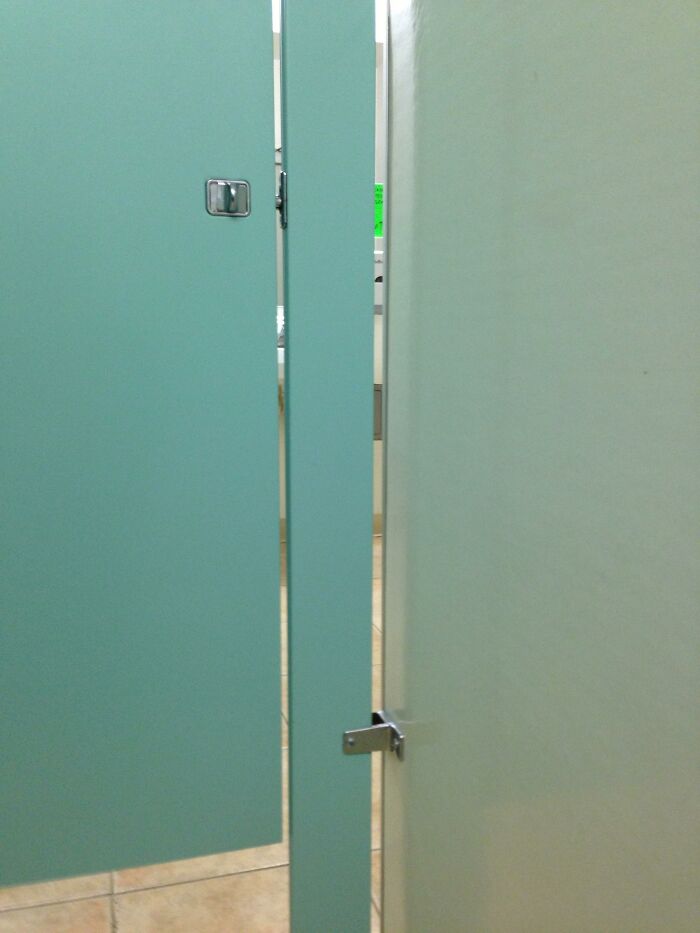 I thought the gap in bathroom stall doors was a myth until I visited the US. Didn’t get privacy for my five-day stay. How do you s**t when someone can look you in the eye?! 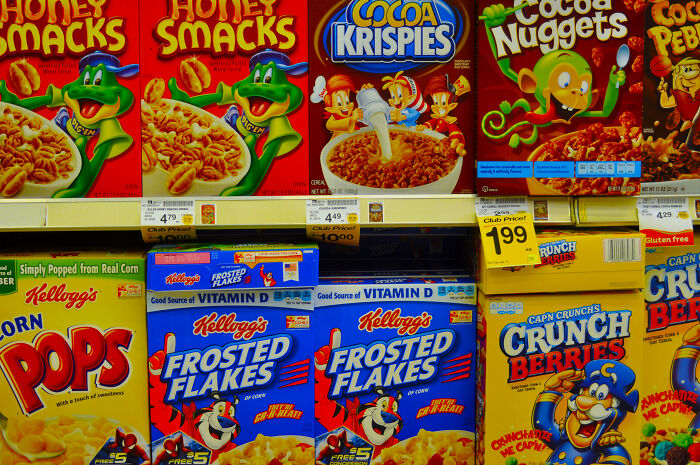 The choices of cereal at the breakfast in the hotel all had at least 20% sugar. 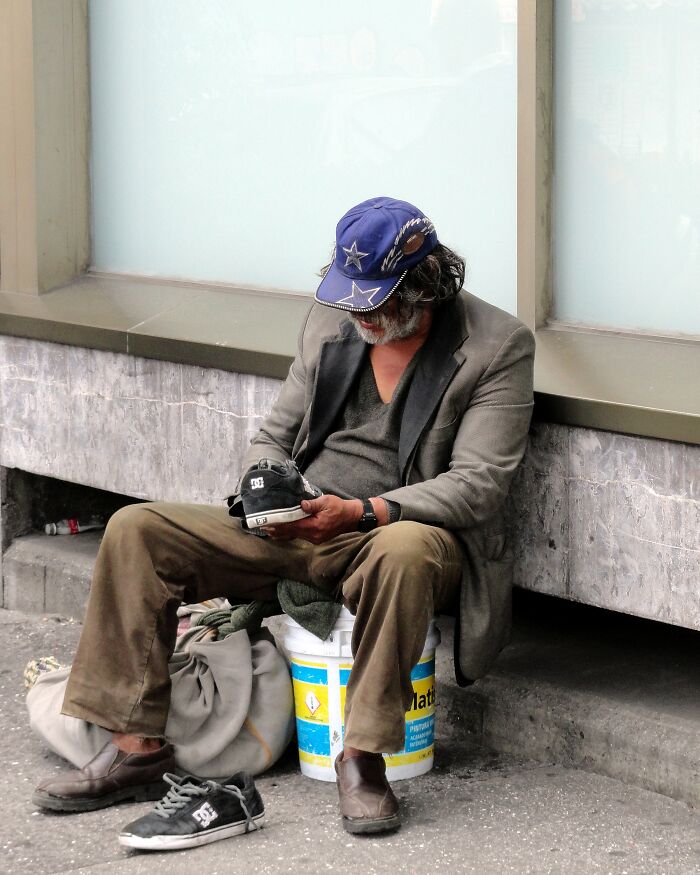 The amount of homeless people. People straight-up walking past an elderly woman living on the streets to get to the 7-Eleven. 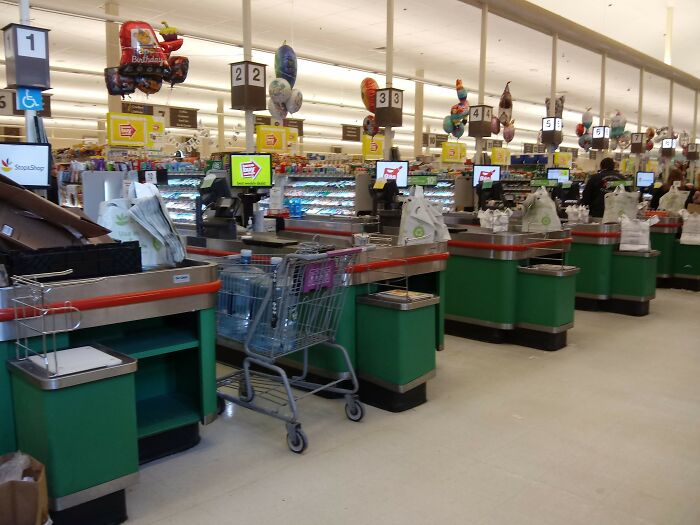 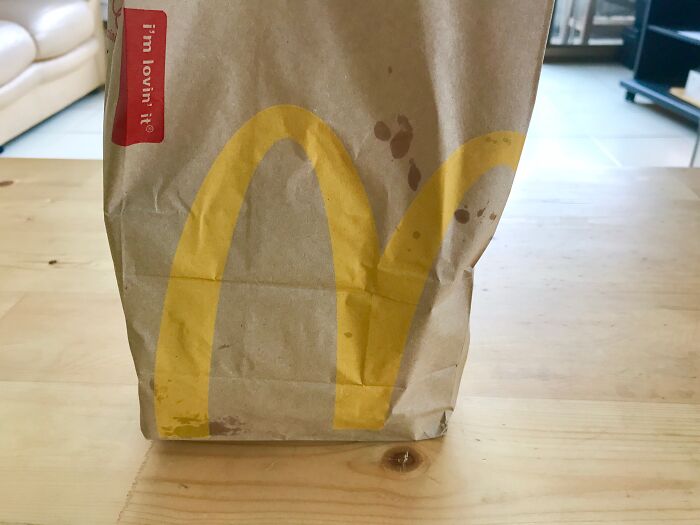 Went to Mc Donalds and ordered what i always order. But it tasted completely different. And fanta was just weird orange juice Syrup.

The sheer size of the place is amazing. Each state is its own little country. I lived there for 7 years and visited some different places, and each time I crossed a state line it was like crossing a border in Europe — everything was different again.

I did a lot of hiking in America around Cali and the south west. My first comment is how amazing your national parks are, backed up by an organised park service. I haven’t seen camp sites in Australia half as organised as yours.

Second was how cheap food is! as i was road tripping I originally planned to cook for myself out the back of my van. But honestly it was cheaper to eat at Denny’s, where I only had to hit breakfast and dinner and I was set for the day – the portion sizes were huge.

Third. Wtf is with your toilets! They are filled to the brim with water, and your poo just sorta floats around until you flush where it then goes around in circles until it goes down the drain. My first few poops in your great nation was really unsettling. But I got used to it by the end.

Fourth. The disparity between rich and poor. Like you see it in Australia a between suburbs bit – but it was just so pronounced in America.