Chiselled abs and sculpted pecs sported by male models and Hollywood actors may appear to be Western society’s idea of how men should look – but it hasn’t always been that way.

Influenced by a number of trends, changes in culture and even availability of food, the ideal frame appears to have transformed enormously from the 1870s when a rounded physique was considered to be a sign of wealth and social class.

Scroll down for video 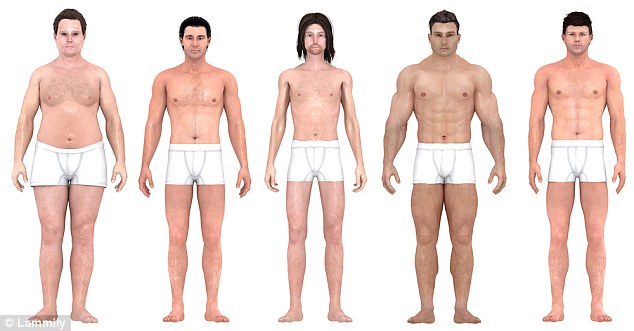 Lamm, a graphic designer and researcher, who created a range of ‘standard human body proportioned’ Lammily dolls in 2014 as a direct challenge to Mattel’s Barbie, collected images from each decade for the study.

<And in a blog post on Lammily.com, he pointed out that it isn’t just women who have seen their body shape being held up against impossible standards over time.

He used 3D computer modelling to demonstrate how the perfect male body has changed over the last 150 years – and how the lean silhouette we see as the standard today, was far from desirable for wealthy gents in the late 19th century.

In the 1870s, having a wide waist was a sign of wealth and suggested having money to pay for plenty of food

On his site, Lamm points out that having a generous stomach was a status symbol and a sign of being able to afford plenty of good food.

Today, men with rolls of fat around their middle are regarded as overweight but in the late 19th century, a tubby frame was linked with a higher economic status.

In 1866, a Fat Man’s Club was founded in Connecticut for members who weighed at least 200lb.

But by 1903 the club closed its doors as the high social status linked to excess weight began to change as food became accessible to more people and was no longer seen as a sign of wealth.

By the 1930s, Hollywood required actors to have a relatively lean physique – not least because the camera made people look bigger than they were.

Screen icons like Cary Grant and Clark Gable exemplified this trend while it’s interesting to note that one star of early Hollywood who was famed for his size – Fatty Arbuckle – was a comic figure before his death in 1933.

Then in 1940, Harvard psychologist William H. Sheldon introduced the idea of body types that is still referred to today. He divided bodies into chubby endomorphs, muscular, broad-shouldered mesomorphs and skinny ectomorphs.

Having a body tending towards mesomorphy meant posessing the most favourable personality with traits including courage and a love of risk.

In the 1960s, men began rebelling, growing their hair, and some even experimented with drugs

However, just 30 years later the male ideal changed again, and the traditionally masculine body shape had morphed into a thin young man, who was the embodiment of the American counter culture.

Lamm quotes Lynne Luciano, the author of Looking Good, Male Body Image In Modern America, who writes: ‘Members of the counter culture were often the highly educated children of the prosperous and influential middle class… With their attention focused on protest, social change, and discovering their inner beings, young men appeared to care little about fitness or body image.

‘They didn’t work out, they were fond of drugs, and many seemed unacquanted with the notion of a comb. On the other hand, they were likely to prize the length of their hair, wore interesting clothes, and made a great fuss over eating natural foods.’

Men in the 1980s were far cry from the skinny frames sported in the 1960s, after bodybuilding became a mainstream activity

By the 1980s, the male ideal had swung back to a more bulked up look.

Lamm puts it down to the popularity of health clubs and working out, while the vogue for skimpy clothes that accentuated the frame also drove the ‘body beautiful’ movement.

Lamm quotes HDNet Movies, that says: ‘The films operated on the notion that one man, a pinnacle of physique, would be the saviour, and that strength, guts, and glory were the resolution to any challenge these characters would face.’

As the excess of the Eighties segued into the minimalism of the 1990s and the emphasis on such big, beefy bodies began to shift.

The physique that soon captured imaginations was Brad Pitt’s slim ‘cut’ torso from 1999’s Fight Club and personal trainers say that clients request a body like his to this day.

In 2012, a study funded by the University of Newcastle researched the ideal body size and shape that we want for ourselves and our partners.

It found that both men and women see the ideal male body as being lean and muscular with a BMI of around 25.