A MYSTERIOUS creature believed to be roaming the countryside near Pontybodkin has been spotted again.

A resident living close to the Wood Pit Nature Reserve between Pontybodkin and Llanfynydd, who wished to remain anonymous, submitted a report of the sighting to Puma Watch North Wales.

They said they saw a cat-like creature “at least the size of a Welsh Springer Spaniel” running across a field on December 20 at 3.21pm.

The witness report reads: “I was drying my hair in my mum’s room, I happened to turn around and through the window that overlooks the field. I saw a cat shaped, however dog sized, full black figure run across the field towards the hedge/fence. I lost

sight of it as there’s a brow in the hill. It was sprinting across.

“I could tell it was not a dog, however I did have a look to see if there were any dog walkers, however there weren’t any.

“This comes after a sighting of a big cat on the old railway line last month, which is 150m to 200m away. Unfortunately, I was unable to take a video or photo.”

It comes a month after Toby Matthews, a hypnotherapist living in Caergwrle, saw a big cat ahead of him while walking his dog in the nature reserve.

The incident took place at about 8.30pm on Wednesday, November 18, near the old railway line through the reserve..

Toby told North Wales Puma Watch North Wales: “I was going along sending a Snapchat, it was a bit misty and spooky and I just wanted to show my partner, so I was actually looking at my phone screen when I first spotted something big moving.

“I looked up and had a sudden moment of shock, almost like when you wake up suddenly from a dream feeling like you’re falling. Maybe 50 or 60 feet away was an enormous black cat looking right at me. I had my phone in one hand and both the dog’s lead and the torch in the other, so when I looked up I managed to drop the torch. I picked it back up and looked around again. 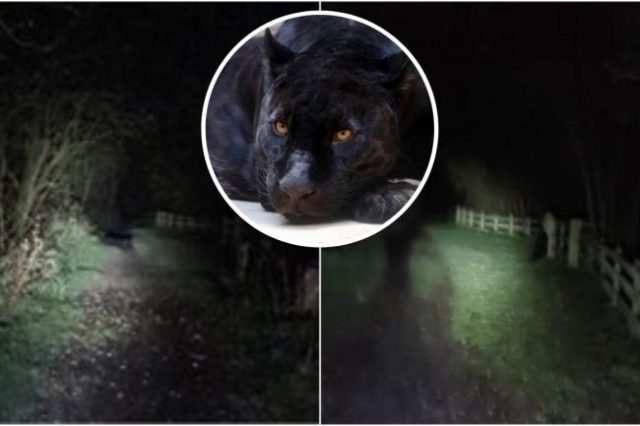 “It had moved to the opposite side of the path and wasn’t really moving at all. It seemed hesitant of me and Tilly (the dog) and I think it cowered slightly when we approached with the torch. I’d guess the torch shining directly at it meant it couldn’t really see us, only hear me and Tilly. I could tell the dog was scared and she started pulling back towards Pontybodkin, I took a photo then turned around and quickly walked back. I wanted to start running but was worried it’d give chase.”

“I’m convinced that it was a puma, it was about two or three times the size of my little Labrador. It was probably around the same size as some of the jaguars at the zoo, and I think it was completely black. I heard about big cats being spotted around Mold and Leeswood a few years ago, and we’re right next to Leeswood here. It’s a really deserted and rural area and I rarely pass anyone else on walks, there’s thick woodland either side of the path where animals can probably stay undisturbed for years.

Tony Jones, of Puma Watch, Leader that the area has a history of sightings.

He added: “There are countless accounts of sightings shared by locals, both recent and historic. It seems it’s common knowledge among many local communities that a small population of big cats such as pumas exist within North Wales.

“We believe most of those reporting sightings did indeed see pumas or cougars. Some people say they aren’t sure and it could have been something more common, though we have a Twitter account with a small established following and from the sightings reported to us, it’s clear many are seriously and genuinely concerned.

“When exotic pets were banned in the 1970’s, many owners released them into the wild. It was completely legal to do this for several years until another law was passed to close the loophole. Big cats are well suited to the Welsh climate and terrain and as it was important to keep them away from humans, big cat owners from across large areas of England may have travelled to Wales to release their beloved pet in what they thought would be a better environment for it to prosper.

“Small populations are reported in Snowdonia and in the Clwydian Hills, and with the solitary animals roaming a large territory, this could well be why so many sightings are reported in the villages below, such as Leeswood, Treuyddn and Pontybodkin.

Artist Transforms Driftwood Into Fantastical Sculptures That Look Like Spirits of Nature
20+ Cases Where Expectation and Reality Are As Different As Heaven and Earth
20+ Epic Shots That Could Only Be Made by Grand Masters of Timing
Branding Methods That Can Take Your Business A Long Way!
Drag Queen Alexis Stone Uses Makeup To Turn Himself Into Any Celebrity He Wants (20 Pics)
20 Women Given Celebrity-Style Photoshoots By Photographer Emily London
This Physicist Is Arguing the Entire Universe May Be One Giant Neural Network
Best Photos Sent To Us This Week (20 December 2020)
Copyright © 2020 Design by Seat.
error: Content is protected !!
This site uses cookies: Find out more.