Your perspective on history may be altered by comparing a number of historical events that occurred at the same period. Check out the photos below to see what Marilyn Monroe and Queen Elizabeth are like!

#1 John Tyler, America’s Tenth President, Was Born In 1790. He Has Two Living Grandchildren. So This Means…

#2 Marilyn Monroe And Queen Elizabeth Were Born In The Same Year. Here They (Both 30 At The Time) Meet At A Movie Premier In London In October 1956

The two were both born in 1926 and once met each other, at the premiere of The Battle of the River Plate in London’s Leicester Square. Monroe was there to accompany her then husband Arthur Miller. You can see her here in the receiving line of guests waiting to shake the young Queen’s hand. 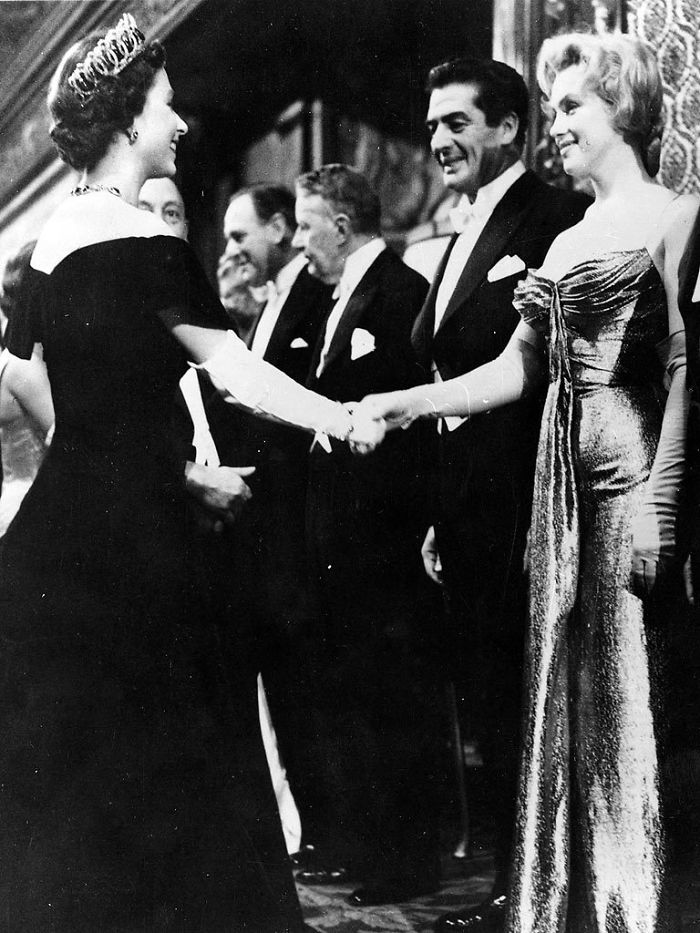 Scientists have determined that wooly mammoths were still roaming the Earth until about 1650 BC, the giant creatures could be found on an island off the coast of eastern Russia at the time. Meanwhile, the oldest of the ‘Great Pyramids’ in Egypt, the Pyramid of Djoser was constructed between 2630 BC–2611 BC, meaning that while man was busy building some of the most incredible structures ever made, wooly mammoths were still doing their thing. 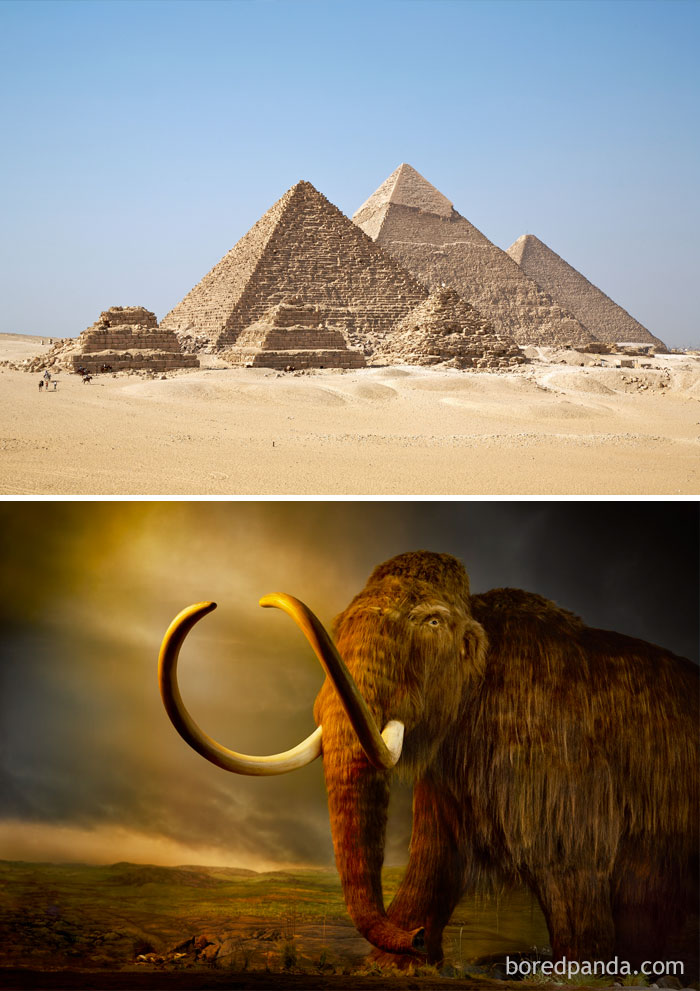 #4 Harriet The Tortoise, Who Died In 2006, Had Seen Charles Darwin In Person

Harriet the tortoise was reportedly collected by Charles Darwin during his 1835 visit to the Galápagos Islands as part of his round-the-world survey expedition, transported to England, and then brought to her final home, Australia, by a retiring captain of the Beagle. However, some doubt was cast on this story by the fact that Darwin had never visited the island that Harriet originally came from. She had an estimated age of 175 by the time she finally died at Steve Irwin’s zoo! 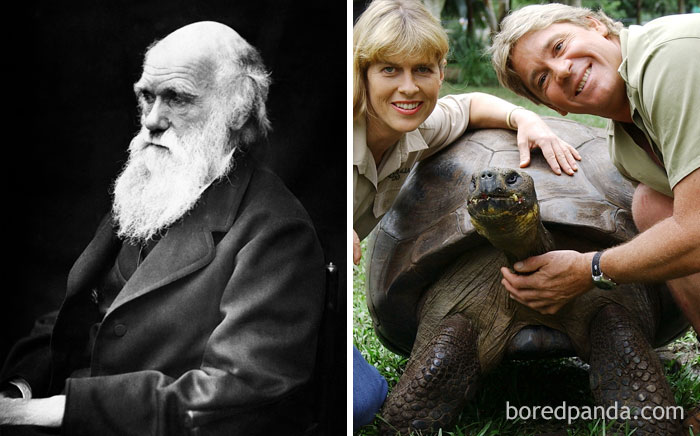 The Aztec Empire, began as an alliance of three Nahua altepetl city-states. These three city-states ruled the area in and around the Valley of Mexico from 1428 until the combined forces of the Spanish conquistadores and their native allies under Hernán Cortés defeated them in 1521. Aztec culture had rich and complex mythological and religious traditions, as well as achieving remarkable architectural and artistic accomplishments.

Meanwhile in England, Oxford University was already well-established. It has no known date of foundation, but there is evidence of teaching as far back as 1096, making it the oldest university in the English-speaking world and the world’s second-oldest university in continuous operation. It grew rapidly from 1167 when Henry II banned English students from attending the University of Paris. 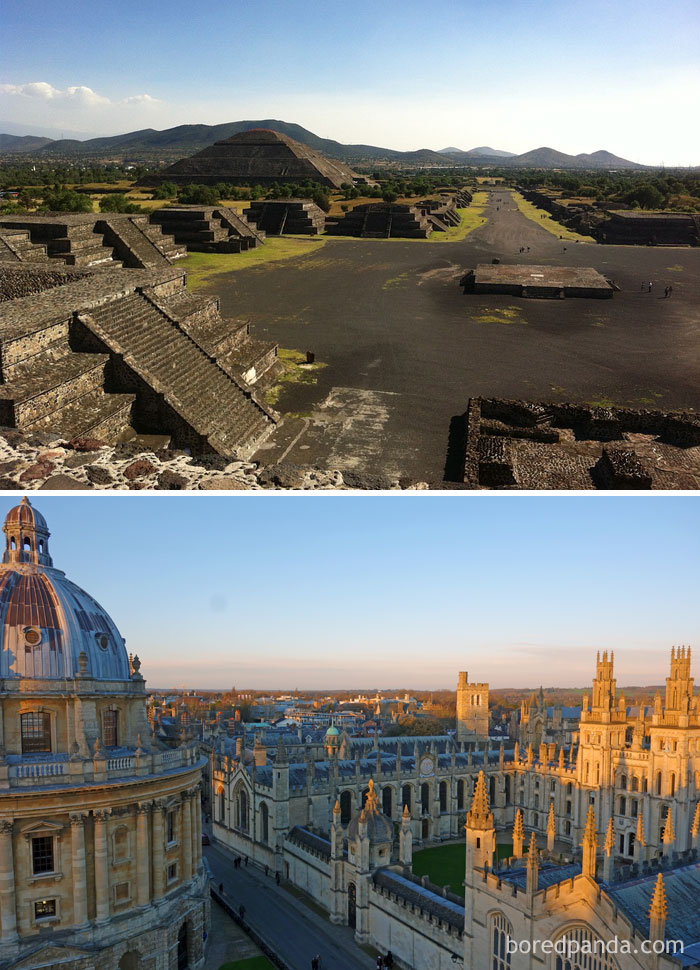 Switzerland is often seen as one of the, if not the, most progressive nations on Earth. It comes as a surprise then that women weren’t granted the right to vote until 1971, 65 years after Finland become the first European country to do so.

By that time, NASA had already landed on the moon, and were driving a moon buggy around! In the meantime however, Switzerland has caught up massively in terms of women’s rights and the gender gap, ranking at number 11, well ahead of the United States at number 45. 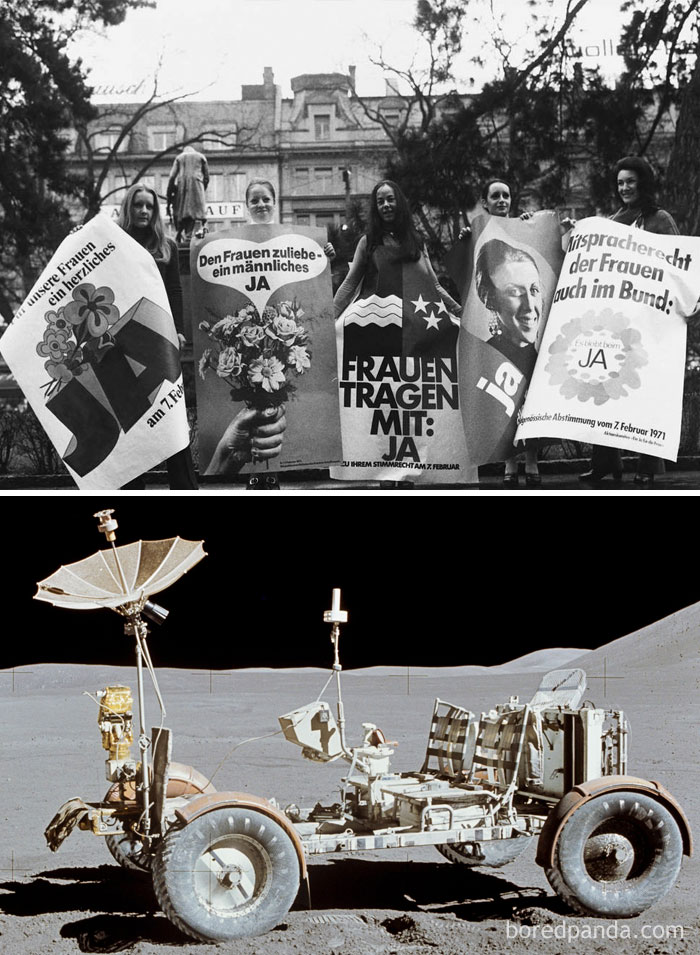 #12 By The Time The Pilgrims Made It To Plymouth Rock, There Was A ‘Palace Of The Governors’ In New Mexico

People often assume that the first Europeans to settle in the United States came with the landing of the pilgrims at Plymouth Rock, MA, in ships sailed from England in 1620. However Spanish explorers had been in the Southwest for almost a century by that time, and in 1610 began building the ‘Palace of the Governers’ in Santa Fe, already a thriving settlement. So when people say shit like ‘speak English, this is America,’ point out this fact! 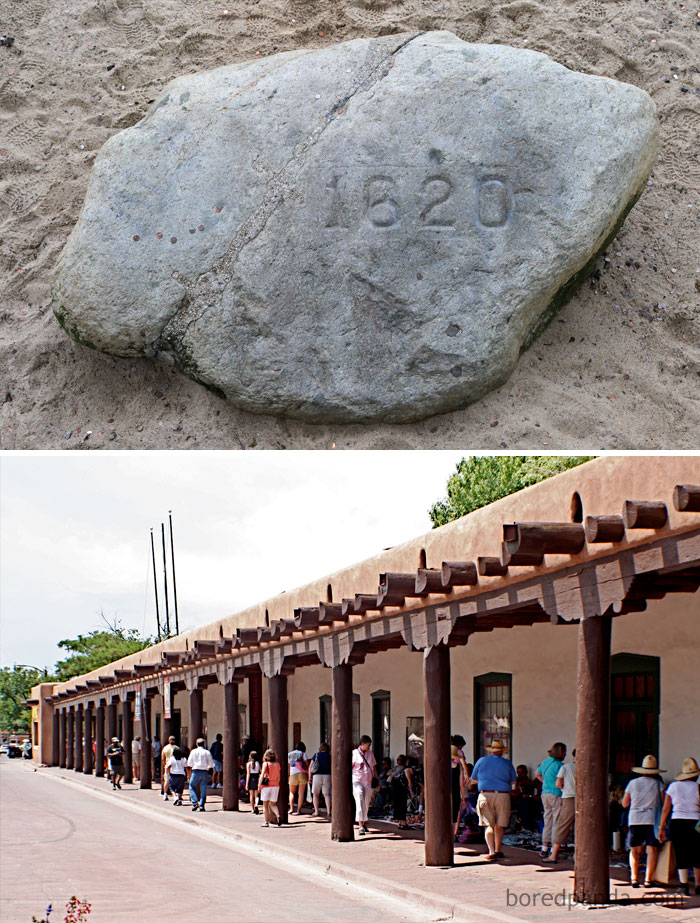 The original fax machine, the “Electric Printing Telegraph” was patented in 1843 by Scottish inventor Alexander Bain, the same year that about 1,000 people set off West for Oregon, forming a huge wagon train on what is now known as the Oregon trail. This set the tone for Westward expansion in the USA, and is the beginning of the ‘Great Migration.’ 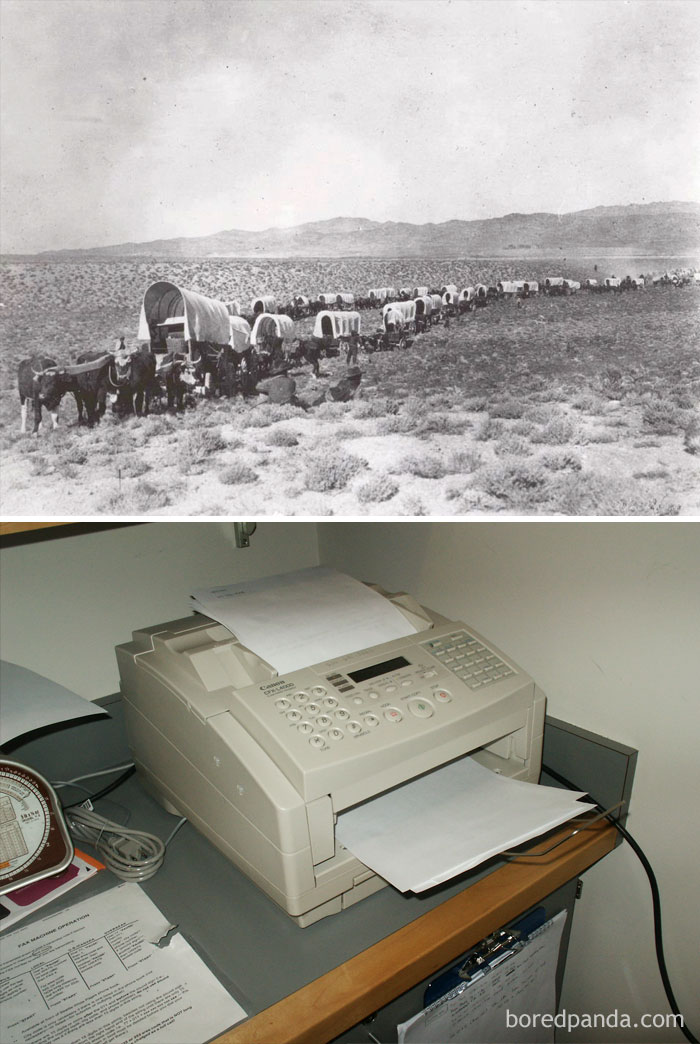 Hanging used to be a common punishment in the UK, and wasn’t abolished until 1868. Micheal Barrett was the last to be executed in this manner, in Newgate prison, London, in front of a large crowd of people.

5 years earlier in 1863, the first journey of the London Underground took place. With a station in operation close by the Newgate prison, it is entirely feasible that many Londoners would take the tube to go and watch somebody get hanged. 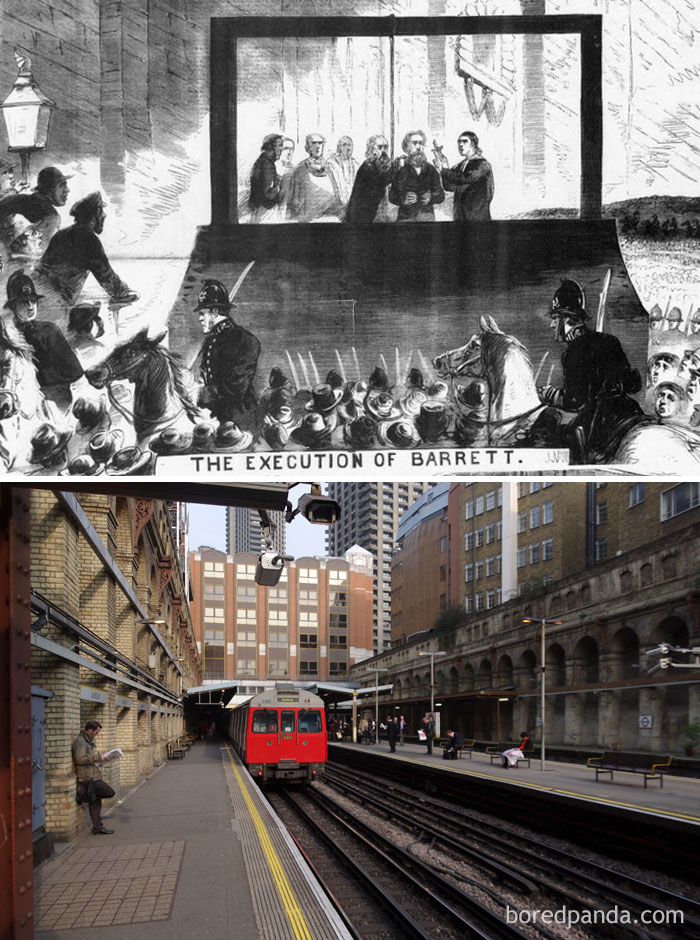 While Alfred Wegener proposed his theory of continental drift back in 1912, his ideas were not taken seriously by many geologists, who pointed out that there was no apparent mechanism for continental drift. Specifically, they did not see how continental rock could plow through the much denser rock that makes up oceanic crust. Wegener could not explain the force that drove continental drift, and his vindication did not come until after his death in 1930. It wasn’t until 1967 that the theory of plate tectonics was accepted by the scientific community, by which time NASA and the Soviet Union were already exploring well beyond the Earth’s crust, they were launching rockets into space and preparing to land on the moon. 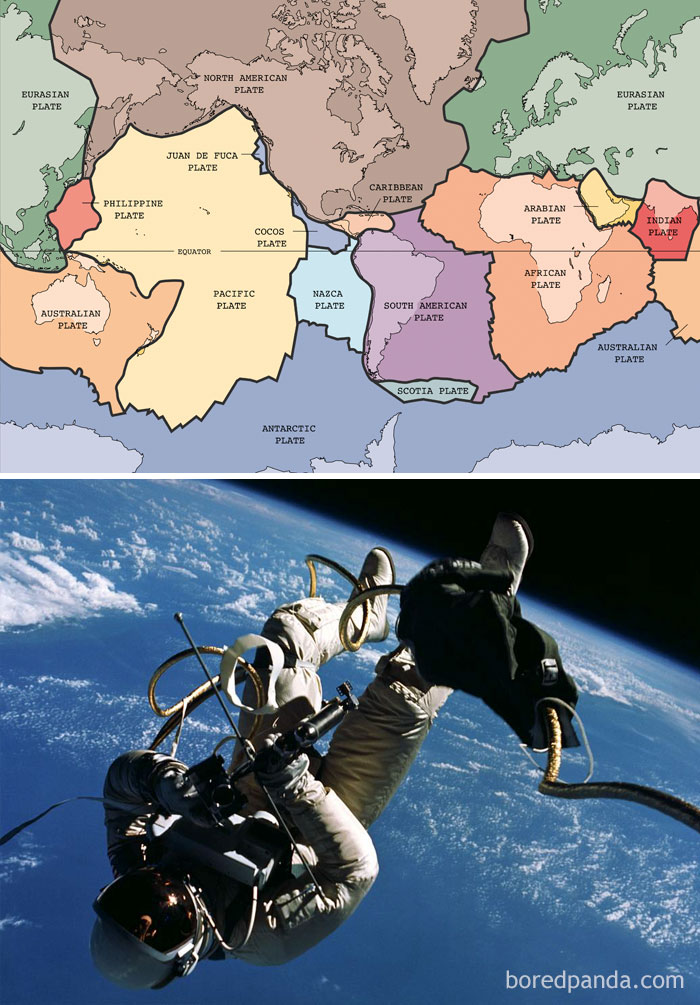