HomeOtherCute Lion Cubs Taking Their First Walk In The Wild

These lion cubs are taking their first walk in the wild at the Serengeti national park in Tanzania, and they’re so young that they haven’t even learnt how to run yet so still heavily rely on their mother,

These cubs are tiny and can’t look after themselves. Their mother is on the lookout for any predators that may be on the prowl like hyenas, leopards, jackals, pythons and martial eagles. Watch how the mother makes sure the baby cubs travel as a tight nit pack to avoid any of them going astray. And to keep them out of danger. Unfortunately, due to threats from starvation, predators and male lions, up to 80% of baby lions die within the first two years.

Female lions generally give birth to somewhere between two and three baby cubs at a time. However, litters can be as small as one cub, and even as big as six of them.

In large prides, each lioness gives birth at around the same time. This lets them raise and suckle the cubs together once delivery is complete. The unique part about a lion pride is that any lactating lioness can do the suckling in the pride; this promotes survival! 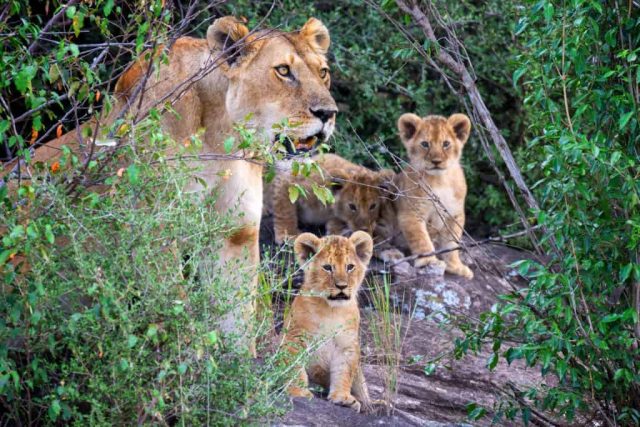 The African lion is related to the domestic household kitty but for one key difference, are significantly bigger and can sometimes weigh upwards of 420 pounds!!  Big as fully mature lions are, newborn cubs usually only tip the scales at less than 5 pounds,- how adorable.

Some species of animals are capable of walking practically immediately after birth, like horses. Lion cubs are not as quick and usually take around 15 days to be able to walk fully. However, some may be able to walk a little sooner; they’re generally not ready to run at that point and usually gain the ability to run when they’re roughly a full month in age.

Lion cubs typically enter the world in isolation and do not meet the rest of the pride, who are the lion social group, until they’re at least a month old and fully capable of both walking and running. Hunting activities typically start when cubs are only six weeks old. The little ones learn by closely observing their mothers. They rely on the care and assistance of the elders in their pride until they’re a minimum of 16 months in age. Once they reach this age, then they can start wandering into the wild without assistance. 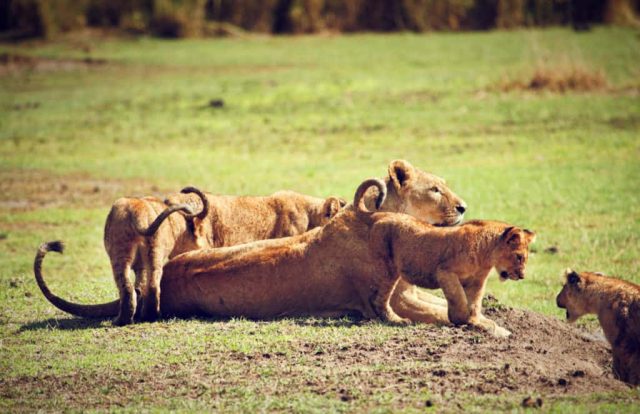 The Himalayas Appear for the First Time in 30 Years, and 14 More Events We Don’t Hear About Everyday
31 Dogs Before And After Being Groomed In This South Korean Salon
7+ Amazing Facts about a Woman’s Body
Bikini, tan* and others ... and so on ..
NASA Released Images Of “Then And Now” – This Is The Destruction We’ve Caused To Our Earth
Why We Can’t Sleep Without a Blanket, Even on a Hot Night
The Coincidence Project: 50 Photos That Are So Perfectly Timed, You Won’t Believe They’re Real
Opposites Attracts: Couples with Different Characters Work Well

50 Photos Of Things Your Rarely Get To See
20 Actors And Their Most Famous Roles Edited By Artist Ard Gelinck
30 Celebrities Before And During The Quarantine
Before And After Pics Of A 73-Year-Old Mom Who Lost Over 50 Pounds With The Help Of Her Daughter
Incredible Photos Capture Strength and Determination of Lioness Running Down Her Prey
People Are Recreating Terrible Thrift Store Art At Home And It’s Hilarious (40 Pics)
This Thai Woman Creates Hilarious Instagram Vs. Reality Collages (30 Pics)
Paper Quilling Artist Vesna Rikic Recreates Van Gogh’s Starry Night Painting
Copyright © 2020 Design by Seat.
error: Content is protected !!
This site uses cookies: Find out more.