Our stomach is said to act as our sixth sense, alerting us to objects and people. There are some who listen to their instinct when it comes to relationships and those who choose to disregard it. Maybe it’s because they are having so much fun and believe that the assumptions they are making are false. But most of the time, our gut instinct and the other person’s actions make their intentions quite evident.

1. They rush the relationship. 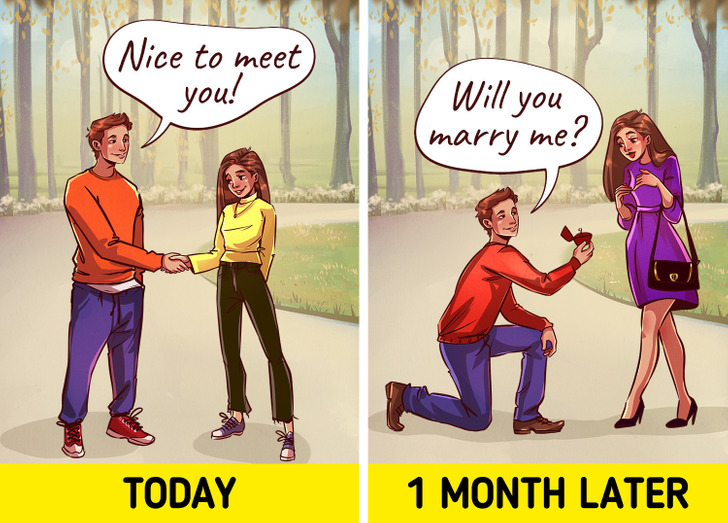 Broke up about 18 miserable months later, just shy of final wedding venue deposits. Realized the girl I thought she was, was, in fact, not the girl she turned out to be. ethan65 / Reddit

My friend was married at 18 after meeting a guy after 2 months. 19 years old and she’s divorced and has a baby. karito00vaca / Reddit

I proposed to my wife 6 months into us dating, and we were married 6 months later, the year anniversary of when we first met. Honestly, I would not do that again. There were just so many things about each other that we never learned in the short amount of time that we knew each other. She was extremely controlling and was the type of person who believed themselves to be better than everyone else no matter what. I’m not saying that I was the perfect person either, I had issues with money, holding a job, taking care of responsibilities, that sort of thing. Not to mention, she was 19, and I was 24. flashblazer / Reddit

2. They break your physical and emotional boundaries. 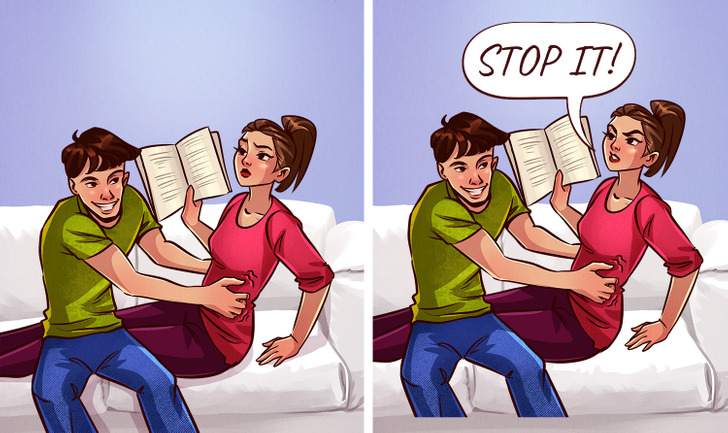 My GF says one of the nicest things I do is take “no” for an answer and not act hurt or rejected. Semi-Hemi-Demigod / Reddit

I had trouble seeing other people’s emotional boundaries. And didn’t know how to respect them even when I did see them. It was a relatively minor problem (too nosy, too pushy) but it annoyed people a lot. Then I met someone who had healthy boundaries but was patient enough to have a few long discussions about what I was doing wrong and what healthy people do instead. Now it’s mostly fixed. But I still cringe at memories of just how annoying I could be in the past. Osato / Reddit

3. There are holes in their house’s drywall. 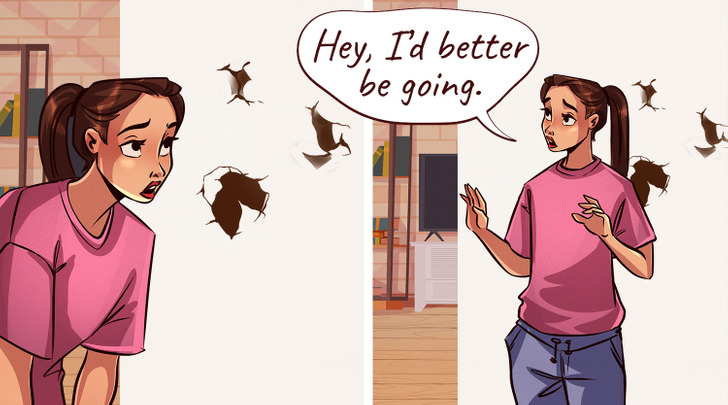 My ex-husband threw this phone on the wall next to me in anger. I instantly knew I was going to divorce this man. Just took me a couple of years to finally be mentally ready about it. imdungrowinup / Reddit

Doors pulled off hinges was my first clue. I didn’t see the holes in the drywall until the doors were rehung…the leaning doors covered the holes. True lesson learned. Vespertinelove / Reddit

4. They are obsessed with social media. 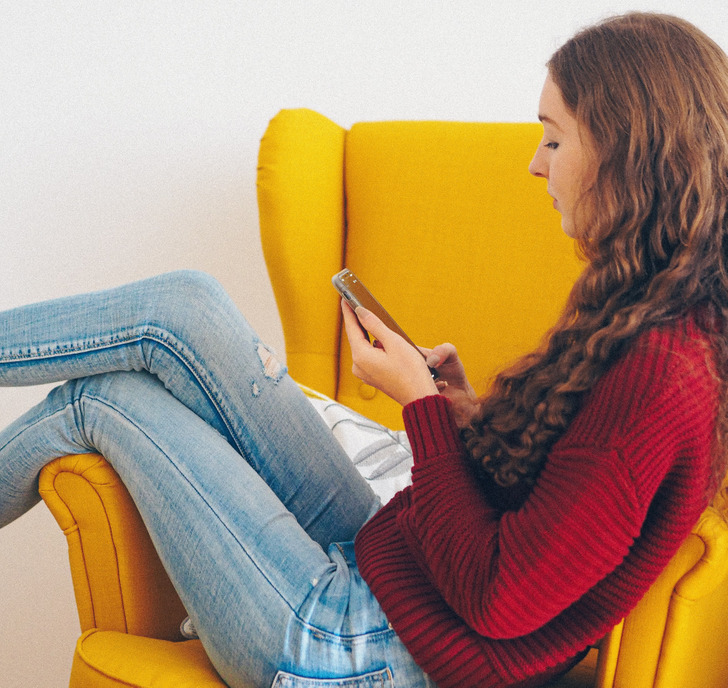 Dated someone who was obsessed with becoming TikTok famous. We would talk through texts for hours about things from old films, art pieces, people, her home country, etc. Things didn’t work out because she felt like me texting her every day was too much and how she felt chained to her phone. She later made TikToks about breaking up and used them to get attention, including wearing the coat she got for me as a present. Savage-Monkey2 / Reddit

When you and your GF are having a conversation, and she is distracted by social media, stop talking. Stop trying to have a conversation. At some point, when she stops for a minute, ask her when she will be able to have some time for just the 2 of you. She’ll be puzzled. Explain that you like her, like talking to her, and would like her full attention when you are together or having a phone conversation. If she continues to multitask, excuse yourself. “I’m going to go now,” and leave or hang up. Janet Parker / Quora

5. You think very often that you “can fix them.” 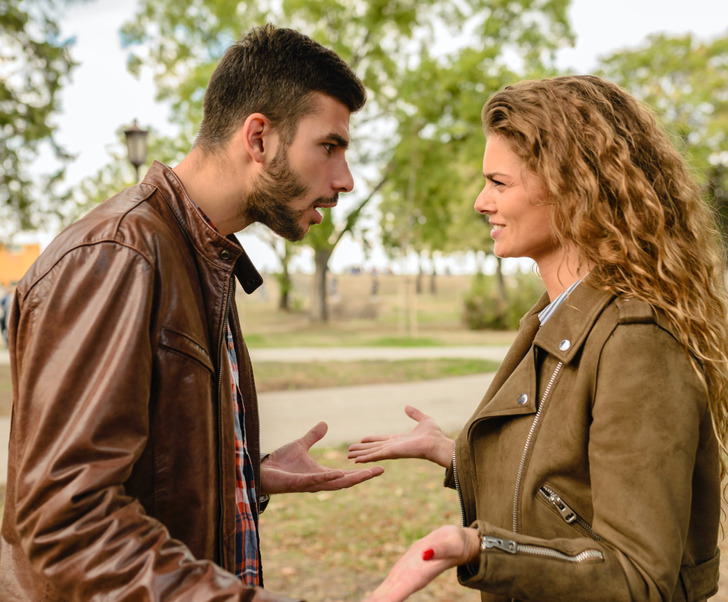 Pretty much anything you look at and think, “I can fix him.” Or relatedly, “But he won’t do that with/to me.” No you can’t, and yes he will. Amiiboid / Reddit

Additionally, just the urge to “fix” someone is also toxic. You love people for who they are, not who you want them to be. pompomhusky / Reddit

6. If they say to you that they are no good.

If a guy tells you he’s no good, listen. JackPoe / Reddit

Also, “I don’t deserve someone as good as you” they were right. Mysterious-House-292 / Reddit

7. They keep apologizing for making the same mistakes.

“I never did that! Tell me when I did that!” “…that’s not how it happened/it wasn’t that bad.” gumbonus / Reddit

Keep an eye out for insincere apologies. “I’m sorry YOU feel that way” or something similar is not an apology. CDubs43 / Reddit

I’ve been with my boyfriend for almost 2 years now. There have been a number of arguments about different things, including his lack of initiative to talk, using his phone the whole time we’re on a call, and even other things involving following girls who I’m not quite comfortable with him following considering their type of content. Whenever we talk about stuff like that, he always apologizes and promises to be better, and tells me he won’t do it again. But the problem is, this only lasts for a short while, and he ends up doing the things he already knows I’m uncomfortable with again. The thing is, he doesn’t even own up to it, and it’s me who brings it up whenever I notice. Once brought up, we’re back in the same cycle of talking things over and him apologizing and vowing to do better and be better. pinkmoscatooo / Reddit

8. They refuse to compromise. 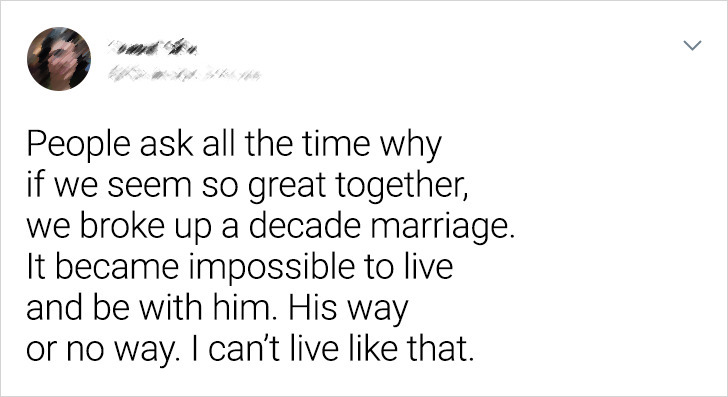 Sounds like my dad. You either have to accept that he is right, or drop it and never mention it again. Otherwise, he’ll scream things like “I am your father,” “you’re a fool,” or “how dare you.” BadmanBarista / Reddit

My boyfriend can be like that. He doesn’t like it if I give him “pushback,” especially if I try to say I’d like to handle a situation differently. It always ends in me crying, apologizing, and then me shutting up for an hour or so. All while he explains why I’m wrong all the time, and I do nothing but disrespect him, tells me I’m soft for crying when he calls me names, and mocks my voice. When mocking me, he’s very over-exaggerated, acting out what I looked like to him when I would explain my side. It hurts worse every time it happens, and I don’t know why I stay sometimes. d***_nightshaade / Reddit

9. They complain and think are the victims in every situation. 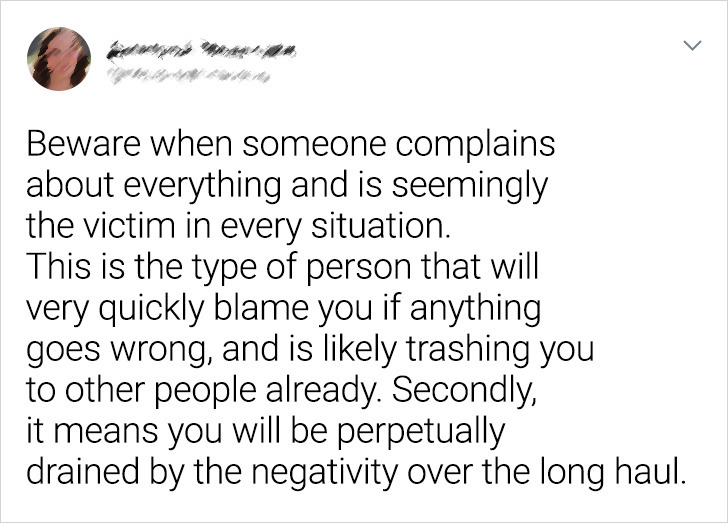 I think I used to be like that. I went through some stuff alright, but I think it became just a very, very good excuse. I got better by taking as much responsibility as I could and by trying to be as honest as I could. Like I’d fight with my wife, and it started out in my head as she’s wrong, I’m right. But I tried to honestly ask myself, even if she was wrong, how much of the escalation was my fault. Like could there be something, anything at all that I could’ve done better, to make the situation better? Turns out, when you ask this question, the answer is yes, almost always. It’s hard work, but my wife and I are still together! IAmInBed123 / Reddit

I heard someone say when you’re arguing with your partner, it shouldn’t be you vs your partner. It should be you and your partner vs the problem. Like you said, in almost every situation that leads to a fight, both parties are to some extent responsible, and if both people can identify where their responsibility lies and work to better themselves, it will help your relationship immensely. My wife and I both grew up with parents that fought each other to win, and it often got nasty, and in an effort to not end up like that, we have solved a lot of problems in our marriage by working together. duhbuurz / Reddit 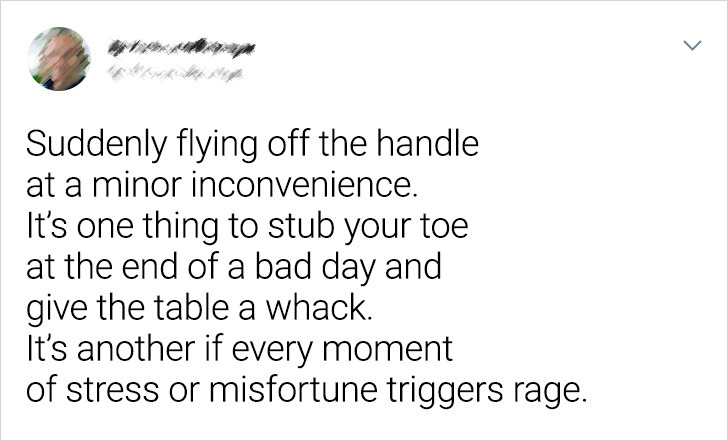 I was dating a girl and forgot to lock her car door when we got out to go into a Walgreens for some snacks. She absolutely LOST it. Like screaming AND crying. For about 20 minutes. I just sat silently, took it, and then asked to meet her the next day and broke up with her because I was not comfortable with that explosion over anything. AngryTreeFrog / Reddit

This girl I worked with had a massive tantrum at a Chinese New Year celebration, for some trivial reason, with her boyfriend and her boyfriend’s brother, and they were so shocked. He dumped her immediately, and she’s regretted it since. We were friends at the time and I remember it was very silly and childish. waddlekins / Reddit

11. They don’t treat everyone equally nice.

Yep. You can tell a lot about the character of anyone by the way they treat those they don’t have to treat well. SeeTheFence / Reddit

My brother-in-law was rude to the waiter the first time I ever ate out with him, and I told my entire family, “Whelp, he’s a massive douche and is going to be an issue.” I’ve been proven right many times. cl2eep / Reddit

You just described my boss to a T. The department manager thinks she’s an angel because she “has nothing but nice things to say about us,” but then she talks to us like dogs. She patronizes me and mocks me on the regular, but when I try to tell the manager, he just asks me what my problem with her is because “She’s so nice and caring.” pistpuncher3000 / Reddit

What would you say is a bright red flag when dating someone? Have you ever left a relationship at its first steps because you recognized bad behavior?