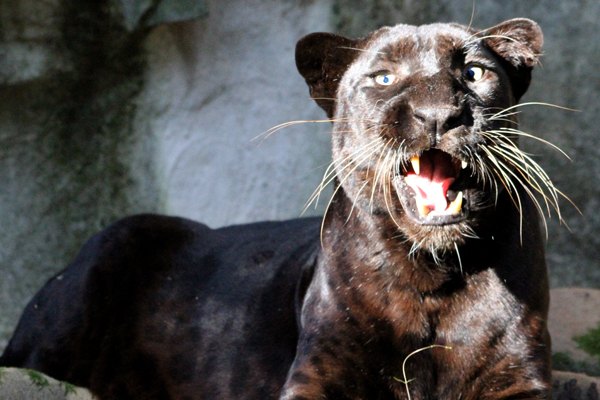 Since the 1960’s it has been considered politically incorrect to call a black cat a black panther.  The big black cats are black leopards or black jaguars and are not referred to as black panthers by anyone who knows anything about big cats.  Some people claim to have seen black cougars, which are sometimes referred to as Florida Panthers (despite the fact that they are not in the Panthera category) and thus extrapolate the term black panther, but Florida Panthers are always tan.

Interested in Petting a Panther Kitten?
Learn why Cub Petting is Bad

Black panther may refer to:

Black panther, a big cat (of any species, but most commonly a jaguar or a leopard) whose coloration is entirely black. This may have originated from the Latin name Panthera for the big cats and was probably shortened from Black Panthera to Black Panther. 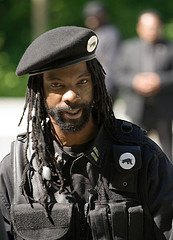 Black Panther, a member of the Black Panther Party, a revolutionary Black nationalist organization in the United States formed during the 1960s.

Black Panther, a member of a group of Israeli Mizrahi Jews inspired by the Black Panther Party in the United States.

Black Panther, the nickname for the British criminal and murderer Donald Neilson.

Black Panther, a comic book superhero in the Marvel Comics universe, and a member of The Avengers.

Black Panther, the symbol for the Filipino Special forces, The Scout Rangers
The nickname of the U.S. 761st Tank Battalion, after their unit’s shoulder sleeve insignia.

The black panther is the common name for a black specimen (a melanistic variant) of any of several species of cats. 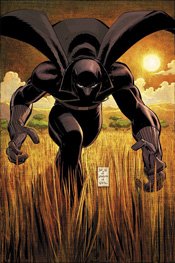 Zoologically speaking, the term panther is synonymous with leopard. The genus name Panthera is a taxonomic category that contains all the species of a particular group of felids. In North America, the term panther is commonly used for the puma; in Latin America it is most often used to mean a jaguar. Elsewhere in the world it refers to the leopard (originally individual animals with longer tails were deemed panthers and others were leopards; it is a common misconception that the term panther necessarily refers a melanistic individual).

Melanism is most common in jaguars (Panthera onca) – where it is due to a dominant gene mutation – and leopards (Panthera pardus) – where it is due to a recessive gene mutation. Close examination of one of these black cats will show that the typical markings are still there, and are simply hidden by the surplus of the black pigment melanin. Cats with melanism can co-exist with litter mates that do not have this condition. In cats that hunt mainly at night the condition is not detrimental. White panthers also exist, these being albino or leucistic individuals of the same three species.

It is probable that melanism is a favorable evolutionary mutation with a selective advantage under certain conditions for its possessor, since it is more commonly found in regions of dense forest, where light levels are lower. Melanism can also be linked to beneficial mutations in the immune system. 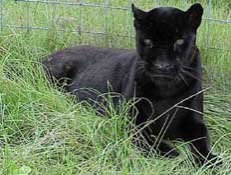 Black Jaguar cubs. In jaguars, the mutation is dominant hence black jaguars can produce both black and spotted cubs, but spotted jaguars only produce spotted cubs when bred together. In leopards, the mutation is recessive and some spotted leopards can produce black cubs (if both parents carry the gene in hidden form) while black leopards always breed true when mated together. In stuffed mounted specimens, black leopards often fade to a rusty color, but black jaguars fade to chocolate brown. The black jaguar was considered a separate species by indigenous peoples.

The jaguar is a beautiful creature, the ground-colour of the fur a rich golden-red tan, abundantly marked with black rings, enclosing one or two small spots within. This is the typical colouring, and it varies little in the temperate regions; in the hot region the Indians recognize three strongly marked varieties, which they regard as distinct species – the one described; the smaller jaguar, less aquatic in his habits and marked with spots, not rings; and, thirdly, the black variety. They scout the notion that their terrible “black tiger” is a mere melanic variation, like the black leopard of the Old World and the wild black rabbit. They regard it as wholly distinct, and affirm that it is larger and much more dangerous than the spotted jaguar; that they recognize it by its cry; that it belongs to the terra firma rather than to the water-side; finally, that black pairs with black, and that the cubs are invariably black. Nevertheless, naturalists have been obliged to make it specifically one with Felis onca, the familiar spotted jaguar, since, when stripped of its hide, it is found to be anatomically as much like that beast as the black is like the spotted leopard.

A black jaguar called Diablo has been crossed with a lioness at Bear Creek Sanctuary, Barrie, Canada resulting in a charcoal coloured “black jaglion”. The gene is therefore dominant over normal lion coloration. 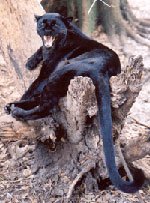 A melanistic black leopard, or “black panther.”  These are the most common form of black panther in captivity and have been selectively bred for decades as exhibits or exotic pets (this inbreeding for the sake of appearance has adversely affected temperament). They are smaller and more lightly built than jaguars. The spotted pattern is still visible on black leopards, especially from certain angles where the effect is that of printed silk. Skin color is a mixture of blue black gray and purple with rosettes. A black panther (leopard) is able to hunt and kill animals outweighing them by more than 1,350 pounds but this is rare because of competition from tigers and lions.

Black leopards are reported from most densely-forested areas in south-western China, Burma, Assam and Nepal; from Travancore and other parts of southern India and are said to be common in Java and the southern part of the Malay Peninsula where they may be more numerous than spotted leopards. They are less common in tropical Africa, but have been reported from Ethiopia (formerly Abyssinia), the forests of Mount Kenya and the Aberdares. One was recorded by Peter Turnbull-Kemp in the equatorial forest of Cameroon.

Adult black panthers (leopards) are more temperamental (nervous or vicious) than their spotted counterparts. It is a myth that their mothers often reject them at a young age because of their colour. In actuality, they are more temperamental because they have been inbred (e.g. brother/sister, father/daughter, mother/son matings) to preserve the coloration. The poor temperament has been bred into the strain as a side-effect of inbreeding. It is this poor temperament that leads to problems of maternal care in captivity as the proximity of humans stresses the mother. According to Funk And Wagnalls’ Wildlife Encyclopedia, black leopards are less fertile than normal leopards having average litters of 1.8, compared to 2.1. This may be due to their high-strung nature.

In the early 1980s, Glasgow Zoo, Scotland acquired a 10 year old black leopard from Dublin Zoo, Ireland. She was exhibited for several years before moving to Madrid Zoo, Spain. This leopard had a uniformly black coat profusely sprinkled with white hairs as though draped with spider webs. She was therefore nicknamed the Cobweb Panther. The condition appeared to be vitiligo and as she aged, the white became more extensive. Since then, other Cobweb Panthers have been reported and photographed in zoos.

Cryptid Status
There are no authenticated cases of truly melanistic pumas. Black pumas have been reported in Kentucky, one of which had a paler belly. There have also been reports of glossy black pumas from Kansas and eastern Nebraska. These are known as the North American Black Panther (NABP). None have ever been photographed or shot in the wild, and none have been bred. There is wide concensus among breeders and biologists that the animal does not exist and is a cryptid. Sightings are current attributed to mistaken species identification by non feline experts, and memetic exaggeration of size.

Historical Descriptions
In his “Histoire Naturelle” (1749), Georges-Louis Leclerc, Comte de Buffon, wrote of the “Black Cougar”: “M. de la Borde, King’s physician at Cayenne, informs me, that in the [South American] Continent there are three species of rapacious animals; that the first is the jaguar, which is called the tiger; that the second is the couguar [sic], called the red tiger, on account of the uniform redness of his hair; that the jaguar is of the size of a large bull-dog, and weighs about 200 pounds (90 kg); that the couguar is smaller, less dangerous, and not so frequent in the neighborhood of Cayenne as the jaguar; and that both these animals take six years in acquiring their full growth. He adds, that there is a third species in these countries, called the black tiger, of which we have given a figure under the appellation of the black couguar.”

“The head,” says M. de la Borde, “is pretty similar to that of the common couguar; but the animal has long black hair, and likewise a long tail, with strong whiskers. He weighs not much above forty pounds. The female brings forth her young in the hollows of old trees.” This black couguar is most likely a margay or ocelot, which are under forty pounds, live in trees, and do occur in a melanistic phase.

Another description of a black cougar was provided by Mr Pennant: “Black tiger, or cat, with the head black, sides, fore part of the legs, and the tail, covered with short and very glossy hairs, of a dusky colour, sometimes spotted with black, but generally plain: Upper lips white: At the corner of the mouth a black spot: Long hairs above each eye, and long whiskers on the upper lip: Lower lip, throat, belly, and the inside of the legs, whitish, or very pale ash-colour: Paws white: Ears pointed: Grows to the size of a heifer of a year old: Has vast strength in its limbs.– Inhabits Brasil and Guiana: Is a cruel and fierce beast; much dreaded by the Indians; but happily is a scarce species;” (Pennant’s Synops. of quad., p 180). According to his translator Smellie (1781), the description was taken from two black cougars exhibited in London some years previously. 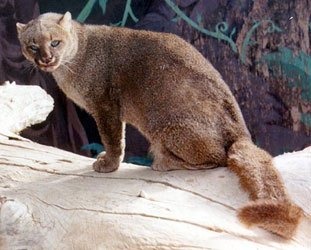 Candidate: Jaguarundi
In the US, the most likely explanation for black puma sightings is the jaguarundi, a cat very similar genetically to the puma, which grows around 30″ of body and 20″ of tail. Their coat goes through a reddish-brown phase and a dark grey phase. While their acknowledged natural range ends in southern Texas, a small breeding population was introduced to Florida in the 1940’s, and there are rumors of people breeding them as pets there as well. Jaguarundis hunting territory can extend to 100km wide for males, and it’s quite possible that very small populations which rarely venture out of deep forests are responsible for many or most of the sightings. While they are significantly smaller than a puma, differently colored, and much lower to the ground (many note a resemblance to the weasel), a little memory bias combined with their secretive nature could explain many of the sightings in the southeastern US.

Candidate: Jaguar
After that, the next most likely are black jaguars, who are believed to have ranged North America in historical memory. Melanistic jaguars aren’t common in nature, and more importantly, jaguars themselves were hunted to near extinction in the ’60’s; However, while they do not look exactly like pumas, but they have the requisite size, and it’s conceivable that there could be, for example, a breeding population hidden in the Louisiana bayou. The jaguar has had several photographically confirmed and many unconfirmed sightings in Arizona, New Mexico, and southwest Texas, but not outside that region.