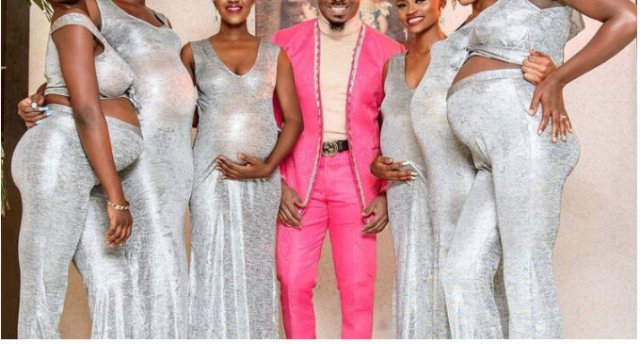 Describing the women as his “six baby mothers to be”, Pretty Mike was filmed rubbing and kissing each of their bellies at the wedding of Nigerian actor Williams Uchemba to his girlfriend Brunella Oscar. The socialite, who owns a nightclub in Lagos, wore a pink suit, while his six dates put on matching long silver dresses or two-piece outfits that emphasized their baby bumps.

“No film trick… we are just living our best life,” Pretty Mike captioned a photo of him with the six women on Instagram, after being accused of staging the whole thing for clout. To be fair, the Nigerian playboy has been known to pull off some crazy stunts for attention, like in 2017, when he was arrested for walking around with young women on a leash.

After the 2017 incident, Mike reportedly signed an undertaking to “stop whatever act of putting girls on a leash or any other degrading treatment to ladies and guys,” but critics are accusing him of pulling off the same type of madness again.

“This is one reason I must have heavy military presence at my wedding venue. You’ll not come and chase clout on my special day,” one person commented on social media.

This is definitely not the first time Pretty Mike shocked his fans, and it probably won’t be the last. Last year, he posted a shot of himself with five brides, writing that his dream was to marry two of his ex’s and three girlfriends.

“We all have dreams and we all have fantasies … I have lived some of my fantasies in my various entrances…. but one of my dreams have always been to marry 5 special women in my life 2 of my ex’s and 3 of my current girlfriends. Dey are all special to me somehow. The question is, what do men really want? I am fulfilled knowing I had the chance to express myself in this illusion,” the Nigerian social media star wrote.

Mother Leopard Teaching Her Cubs Cross The Road, The Video Is Wonderful
27 Designers Illustrate How Trendy People Look In Their Countries
Cyclist Captures An Epic Photo With A Quokka, Which Won’t Leave His Side After
“Roots In Motion” – Catalano’s Travelers Line Through Venice For The Art Biennale
This Artist’s Comics Perfectly Capture All The Silly And Awkward Situations We Face Daily (30 Pics)
Why Britain has so many covid-19 deaths
30 TOP INSTAGRAM INFLUENCERS WHO RISE ABOVE THE REST IN 2020
15+ Reasons why you should never order a prom dress online

35 Funny Comics For Those Who Love Dark Humor And Unexpected Twists
20+ Hilariously Creative Finger Tattoos
20 Photos By Massimo Bietti That Perfectly Capture What Childhood Looks Like Around The World
30 Winning Family Photos From The “This Is Reportage: Family” Contest 2020
Geothermal Activity Highlighted by Zac Henderson
Woman Captures Award-Winning Images of Ants In Her Garden Using Her Smartphone
Black Panther Facts
11 Men*tal Illnesses And Disorders Illustrated As Monsters By Artist Phil Wall
Copyright © 2020 Design by Seat.
error: Content is protected !!
This site uses cookies: Find out more.
theme shared on wplocker.com