Menu
Home
>
Other
>
The science of beauty: What are the common factors in faces that are seen as attractive?

SINGAPORE – The saying goes that beauty is in the eye of the beholder, which implies that there may not be universal agreement on what constitutes beauty.

But science has found that the key to a person’s beauty indeed lies with the human eye – and how it finds facial symmetry aesthetically pleasing.

Based on research done, objects or faces that are perceived to be beautiful often obey the golden ratio, which has a constant value of 1.618 – also known as Phi, or the Fibonacci number. It is a ratio to define symmetry in structures, including the human body.

It may help explain why Thai singer Lisa of South Korean girl group Blackpink was ranked the world’s Most Beautiful Face and Myanmar model-actor Paing Takhon picked as the Most Handsome Face, according to last year’s list compiled by film critic website TC Candler and released on Dec 28. The two are seen to have very symmetrical faces.

Standards of beauty often have strong biological underpinnings, where in general, traits thought to be beautiful are those that serve as a “signal” of good genes, for passing on to potential offspring. Research shows that people with more symmetrical faces tend to be healthier than asymmetrical people.

The golden ratio is also observed in nature, architecture and art, such as the patterns that can be seen in sunflowers, pine cones, seashells and other plants and animals.
When it comes to faces, there are two general rules of proportions.

Two would be the rule of fifths. The face can be vertically divided into five parts.

The more proportionate the parts are, the more attractive one is deemed.

Dr Chua Jun Jin, a plastic surgeon at Mount Elizabeth Medical Centre, said that generally, a small face with prominent facial features is more attractive. In other words, if the eyes, nose and lips occupy a larger proportion of the face, the more attractive the person looks.

He also said that having flawless youthful skin is critical in beauty.

“Skin is like the fabric of a dress. Good skin that is even, blemish and wrinkle-free would add to a person’s looks. Looks can also be enhanced by make-up,” Dr Chua added.

A perfect set of white even teeth and an attractive smile are important too, Dr Chua added.

While there are universal preferences, beauty is influenced by culture and gender, and Asians generally prefer petite V-shaped faces in both genders.

Dr Shiau Ee Leng, the founder and group medical adviser of ClearSK Healthcare Group, noted how she has been seeing a lot of patients here who do minimally invasive procedures such as injections of fillers to achieve the golden ratio for their nose and chin, or requesting botox at their jawline to slim down a square face. 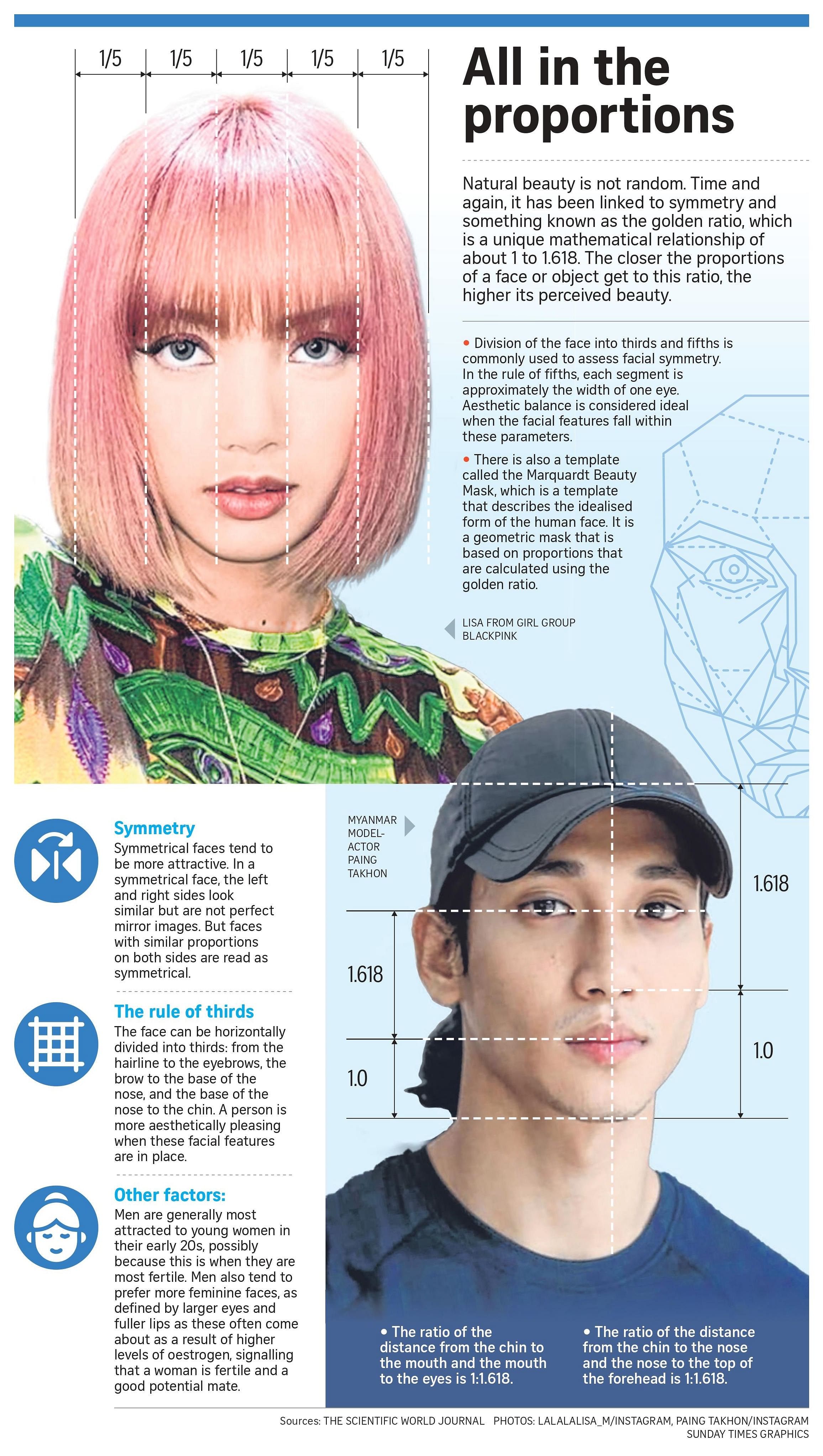